Designing Black Holes in the...
Back

Astrophysical black holes are too remote to probe the quantum gravity effects. To test fundamental quantum processes at the event horizons, we might need to roll our sleeves, and go downstairs to the lab.

Black holes have attracted attention of scientists, artists and sci-fi writers. In the movie “Interstellar” (2014) Christopher Nolan went even further by hiring physicist Kip Thorne as a scientific advisor and executive producer, implementing and promoting the concept of gravitational waves – back than yet an unconfirmed hypothesis – into the movie, into our culture, into our lives. Kip Thorne and collaborators did an excellent job, together with actually being lucky confirming gravitational waves in the experiments a year later (and after decades of instrumental upgrades and designs). For this work, Kip Thorne, together with Rainer Weiss and Barry Barish, has received the Nobel Prize in Physics 2017 – which technically makes “Interstellar” the only movie endorsed by both the Oscars and the Nobel Prize in Physics.

In the recent years we have heard many things about black holes: We have witnessed the first ever image of the shadow of a supermassive black hole M87, interpreted from the data from Event Horizon Telescope; we have read reports of discovery of a supermassive black hole candidate, Sagittarius A*, just in the middle of the Milky Way (Nobel prize in Physics 2020). The news outlets are feeding us with the closest black holes for breakfast, the most giant ones for lunch. You are invited for dinner.

Half a century ago the situation was rather different. Black holes dwelled only on paper, the humble shadows over Einstein’s equation. They were fun toys for mathematicians, but many physicists repeatedly rejected them on the existential grounds. But once Sir Roger Penrose went especially far: He was the first to construct a realistic model explaining how a black hole could have been created – caused by the so-called gravitational collapse of a massive star (1965). And this opened up the era of black hole exploration.

Inspired by Penrose, Stephen Hawking put his hands on the problem of what happens at the surface (“horizon”) of the black hole. He realized that the black hole would create such strong fields that they would itself polarize the surrounding vacuum. The quantum vacuum is not emptiness, but a continuous life full of creation and annihilation of virtual particles. One can, for example, imagine the situation when a pair of photons is created at the horizon, one photon goes inside the black hole and gets trapped, however its partner escapes outwards. After summing over all the possible events like that, Hawking finds that there is a finite flux of radiation determined by the surface gravity of the black hole itself. In other words, the black hole is not black, it illuminates light. This was a surprising result. First, it prescribes every black hole to have a temperature – the Hawking temperature, and entropy – the Bekenstein-Hawking entropy. The other surprise is that the Bekenstein-Hawking entropy is “geometrical”: it is proportional to the quarter of the surface of a black hole in Plankian lengthscales. Even that a consistent theory for quantum gravity is far from being built, we are confident in existence of Bekenstein-Hawking entropy, as it was reproduced by a number of methods, including a statistical counting of black hole microstates within string theory formalism.

Hawking radiation: a pair of photons is created from quantum vacuum at the black hole horizon, one photon goes inwards and got trapped, the other one escapes, thus contributing to Hawking radiation. The black hole is prescribed with temperature T, determined by its surface gravity, adn Bekenstein-Hawking entropy S, determined by its quartersurface (in 3D). Figure credit: Alexander Kruchkov

Unfortunately, testing the indispensable feature of quantum gravity is impossible in its purist form: The astrophysical black holes are too distant, too cold, too classical. And even if we could create a black hole at the energy scales of Large Hadron Collider, a detailed analysis shows that it’s lifetime would be a tiniest fraction of a second, and no observables could be constructed. We need to take a different path if we want to probe Bekenstein-Hawking entropy in the lab.

The Holography of a Black Hole

The fact that the Bekenstein-Hawking entropy is proportional to the surface (and not the volume), was the first indication that the relevant physics of black holes is of lower dimension. This, together with other observations, has lead to the concept of dimensional reduction in quantum gravity (´t Hooft 1994; Susskind 1995), known as “the holographical principle”. A particular demonstration of the holographical principle is AdS/CFT correspondence. This principle allows to take a gravitational theory for a three-dimensional black hole in AdS space and project it on a two-dimensional theory with strong interactions (but no gravity).

In simpler words, there is a complex two-dimensional theory which sees a black hole as a three-dimensional “hologram” – in a similar way we can see the giant holograms of elephants in the German circus Roncalli. As the theoretical research in holography and black holes is an active topic, it is clear that making such a hologram of a black hole could make some things easier, for example for understanding the origin of the Bekenstein-Hawking entropy. Unfortunately, in a general case such a hologram is quite a complicated physical object itself, and it’s not always straightforward to indicate a gravity dual for each holographic quantum matter. A simpler model is thus needed.

The Image of the Apple 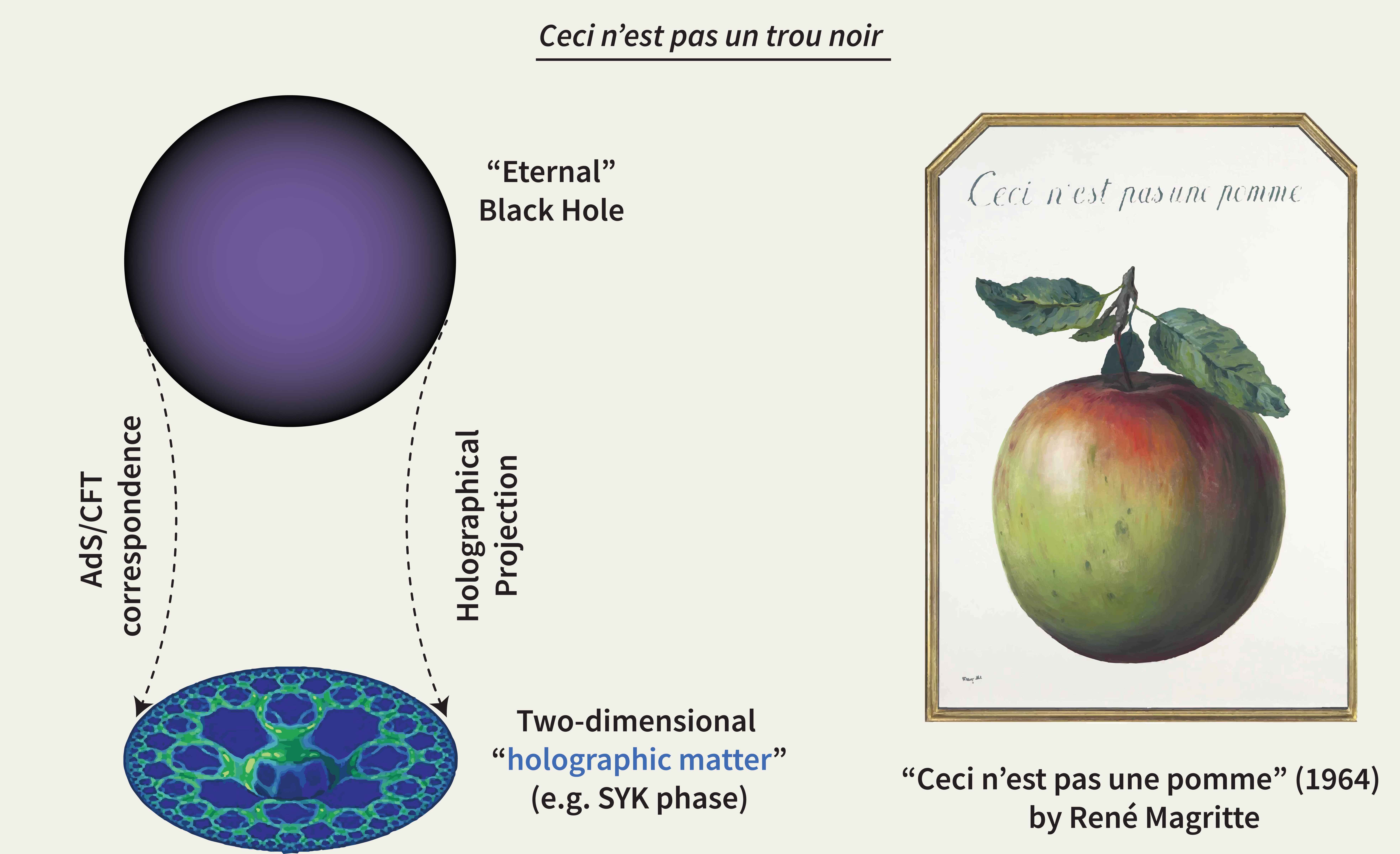 Holographical principle: one can project a gravitational theory describing black hole on a lower dimensional system without gravity (but with strong interactions) . “Ceci n’est pas une pomme” (1964) – “This is not an apple”, a painting by Belgian artist Rene Magritte. Magritte explained: This is not an apple, this is an image of an apple. Figure credit: Alexander Kruchkov

The holographical principle could be employed as an underlying machinery for constructing a meaningful black hole hologram. For this, we want to use the simplest possible holographic construction to refine only the key properties of the black hole. A simple model for quantum gravity was proposed in 2015 by Kitaev on the basis of existing model of Sachdev and Ye describing strongly interacting quantum matter, known now as SYK model. This model looks surprisingly simple in the “projected” representation (quantum matter in a lower dimension, with strong interactions but no gravity) and describes the physics of event horizons of the extremal black holes. It was established that a one-to-one correspondence between the SYK model and the extremal black holes holds in the low-energy region, including a surprising fact that both the SYK matter and black holes have finite Bekenstein-Hawking entropy per particle, even down to zero temperatures. This is an amazing result, as typically the materials we are accustomed with (for example, metals), have zero entropy per particle when temperature goes to absolute zero. The SYK phase, on contrary, is distinct in these characteristics, and will demonstrate properties commensurate with the finite entropy per particle. It was shown recently that the Bekenstein-Hawking entropy can be probed through the thermopower measurement of the SYK island, performed on a sub-micron sample in a liquid helium temperature range, a technique well established in a modern solid-state laboratory. 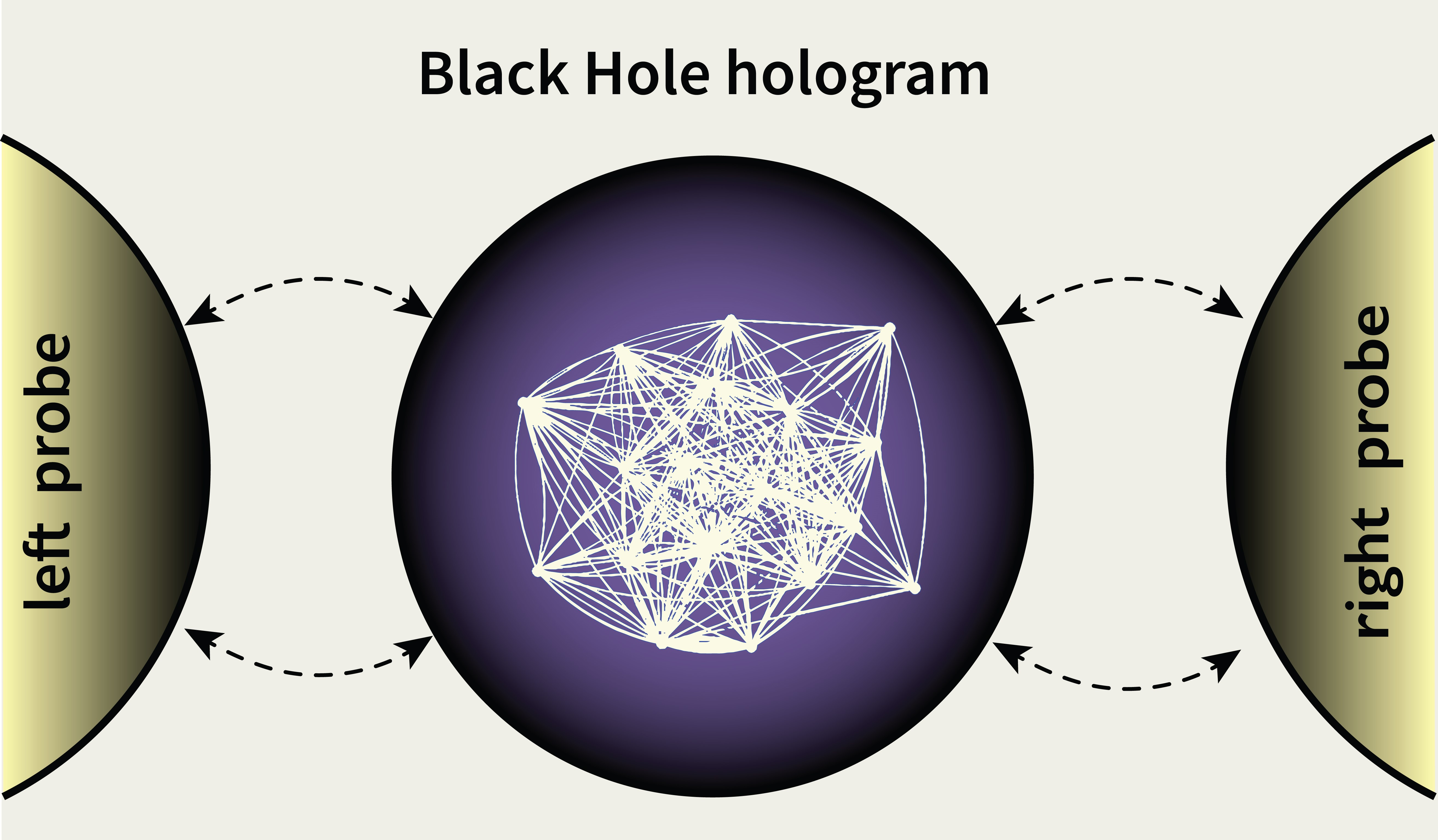 An analogue black hole can be made on the basis of the SYK matter to probe Bekenstein-Hawking entropy in the lab. Figure credit: Alexander Kruchkov

The mission is to construct the SYK model in direct experiment. There are several proposals in this direction, and we are actively working on constructing the mesoscopic SYK state in Quantum Dots.

For this, we need several elements to be used: low dimensional materials (such as graphene), robust flat bands and carefully engineered shapes on the scales of a few dozen nanometers.

The task is challenging, however it’s not something impossible: It is within the reach of modern quantum matter techniques, if enough efforts are invested.

But it is not only enough to construct the SYK model in experiment, one also needs to observe it, to distinguish it from the other phases, and to explore it. We need to solve several engineering tasks, make numerical optimizations, and study all the possible surrounding effects to have the black hole hologram in its best shape for analysis. Yet, we hope that the platform for probing Bekenstein-Hawking entropy will be soon achieved.

Constructing playgrounds for analogue gravity will help us exploring black hole horizons in the cost-effective room-scale experiments, an exposition of Quantum Gravity open for outreach.

Dr Alexander Kruchkov is Lindau Alumnus 2016, working on the interface of quantum matter theory and experiment. He is supported by the Branco Weiss Society in Science (ETH Zurich) to convey his independent research at University of Geneva and Harvard University, dedicated to constructing replicant black holes in quantum materials.