I, on the behalf of the Asian Science Camp Alumni Association, have hosted an event “Interactive Session with Nobel Laureate Prof.Dr. Dan Schechtman” in a collaboration with the International Quasi Crystal Conference and Embassy of Israel In Nepal on 19th September 2016, at the Hotel Soltee Crown Plaza, in Kathmandu, Nepal.

Kathmandu’s Durbar Square with the magnificent Bodnath Stupa in its center (picture was taken before the horrible earthquake in April 2015 struck the city). Photo: iStock.com/fotoVoyager

The hall of Hotel Soltee Crowne Plaza was jammed on 19th September with researchers, young scientists, students of various fields, political leaders from leading parties, government representatives and policy makers to attend the talk of Prof. Dan Shechtman. He stood among a huge crowd of unknown faces, yet expressed himself with such an amiable manner. Only few people possess such a down to earth and charismatic personality like Prof. Dan Shechtman. No doubt, the Nobel Laureates’ story is a fascinating one: from his achievements and the hard work he has done to the roller coaster ride of his eventual success.  In addition, Shechtman also shared many of his ideas, gave us insights on how he thinks and much more. Only few people get the chance to meet such a great personality and the young researchers, I must say, are very lucky to get this once in a life time opportunity to meet Prof. Dan Shechtman.

Since Dan Shechtman is a professor of material sciences and a Nobel Laureate in Chemistry, everyone expected him to talk about his scientific achievements and experiences. But out of the blue, he talked about another topic dear to his heart: the role of technological entrepreneurship for the development of a nation. The title of his speech was “Technological Entrepreneurship – A Key to World Peace and Prosperity”. He advocated the important role of techno-entrepreneurship in transforming developing countries like Nepal into efficient economies. He emphasized that developing entrepreneurial spirit and a well educated youth is paramount for the development of a country. 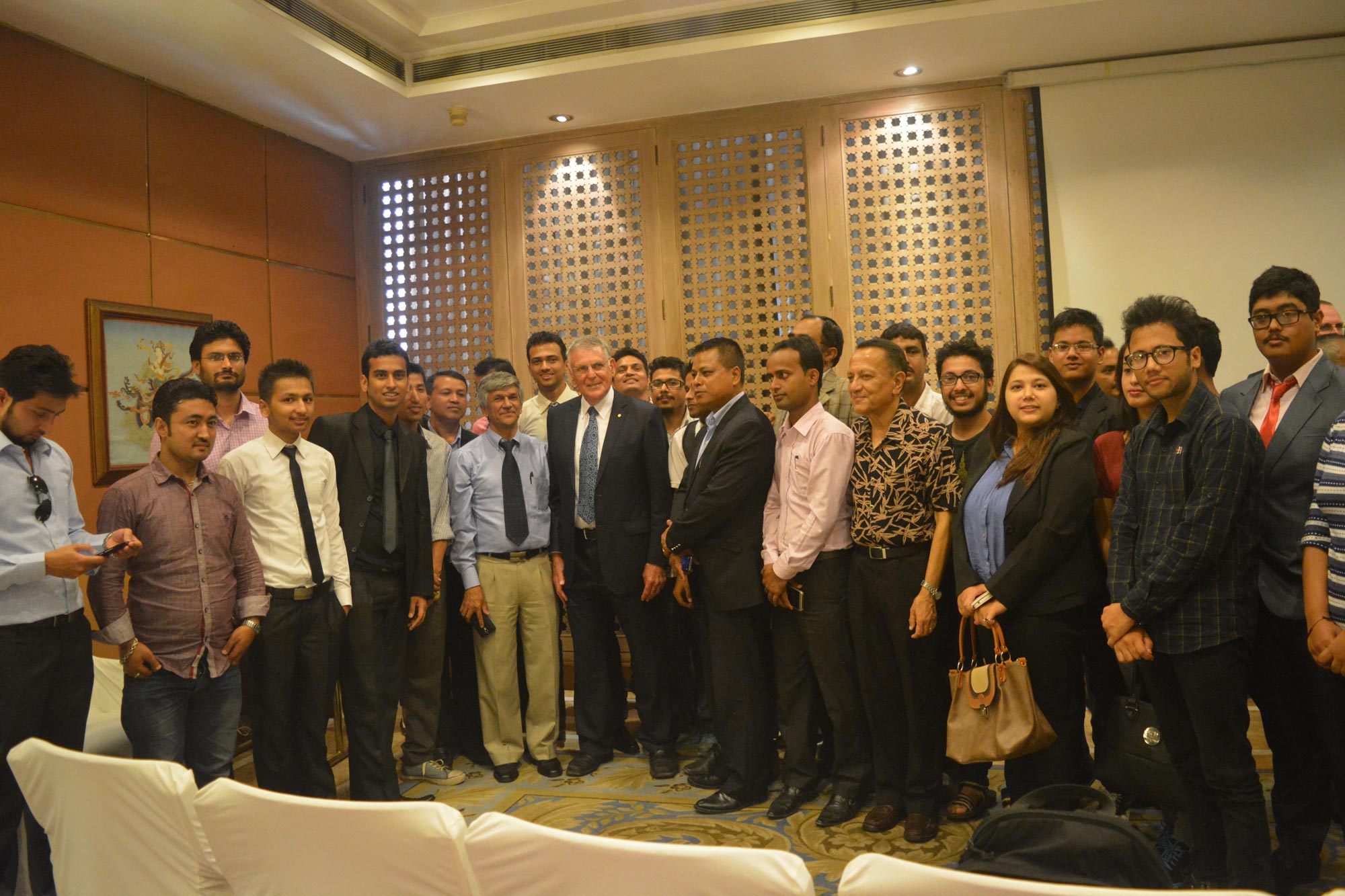 Professor Shechtman especially stressed the significance of good basic education for everyone. He listed good engineers, science education, proper government policy and anti-corruption measures as basic components that help empowering a country’s entrepreneurship. He also shared ideas and suggested some do’s and don’ts, e.g. regarding potential sources of investments and strategies for the startups. Shechtman then explained the situation in his home country Israel: “Israel is a small country with a small population and small markets. So the majority of our products are exports. If you produce products more efficiently, you can compete easily in foreign markets. When you come up with a new thing, it is innovation. When you turn your innovation into something marketable, that’s entrepreneurship.”

With his experiences at the Technion, Professor Shechtman showed the importance of science education for a nation. He further added: “Entrepreneurship does not come naturally to anyone. You have to teach it like you teach mathematics.” Shechtman illustrated his thoughts by bringing up relevant examples of the development of Israel, Taiwan and other comparable countries. Finally, the participants got a chance to ask their own question which was a dream coming true for everyone in attendance. Professor Shechtman’s speech was a real treat to all of us and many young Nepalese will take lots of inspiration from his speech.

Khagendra Acharya, Lindau Alumnus 2013, Co- founder of the Quark Science Research and Development Centre and President of the Asian Science Camp Alumni Association, is working to promote science and technology in Nepal. He is also a research fellow at Massachusetts Institute of Technology (MIT) and an alumnus of the 63rd Lindau Nobel Laureate Meeting.