The Unbearable Lightness of Neutrinos
Back

They’ve been the butt of many a science-fiction joke and are incredibly difficult to investigate: neutrinos. Now, a new experiment has begun in south-west Germany to pinpoint their exact mass.

In the world of physics, the mass of a particle is an important information that helps physicist analyse and predict the behaviour of said particle. Moreover, in contrast to weight, which depends on the gravitational pull a particle is experiencing, its mass is a constant that does not change.

A famously elusive particle regarding its mass and weight is the neutrino. Named after its neutral electrical charge, neutrinos travel at almost the speed of light, hardly ever interact with matter and can pass through virtually anything – no matter how dense. Some neutrinos originate back to the Big Bang, others are still being created, for instance, via exploding supernovas or reactions in nuclear power plants. Additionally, some are generated by naturally occurring radioactive decays: inside our bodies some 5,000 neutrinos per second are released when an isotope of potassium decays.

The resting mass of these sub-atomic particles is so small that until recently, researchers assumed it didn’t have any mass at all. In 2015, Takaaki Kajita and Arthur McDonald were awarded the Nobel Prize in Physics for their experiments in the late 1990s and early 2000s in Japan and Canada, respectively, which demonstrated that neutrinos do have mass: There are three subtypes of neutrinos – the tau, muon and electron neutrinos. The experiments of Kajita and McDonald showed that neutrinos can switch, or oscillate, between these different forms. This oscillation, however, is only possible, if the particles have mass.

Although their experiments elegantly proved that neutrinos do have mass, Kajita and McDonald were not able to pinpoint the exact weight of neutrinos. On 11 June 2018, in the presence of the two Nobel Laureates, the Karlsruhe Tritium Neutrino (KATRIN) Experiment of the Karlsruhe Institute of Technology (KIT) has launched its long-term data collection by injecting high-purity molecular tritium gas for the first time into the KATRIN source. Tritium is an isotope of hydrogen, which is radioactive and emits one electron and one neutrino when it decays into the helium-3 isotope. The researchers hope that KATRIN will allow them to finally answer the long-running and fundamental questions of modern particle physics: What is the absolute mass of neutrinos?

The KATRIN experiment is a gigantic collaboration in terms of engineering, partnerships, time and money. It took almost 15 years to build and connect the individual devices that are now buried on the Campus of the Karlsruhe Institute of Technology in the south-west of Germany. Moreover, currently more than 150 scientists, engineers, technicians and students from twelve institutions all over the world are involved in the project, whose data acquisition is expected to take at least five to ten years. The entire device costs just over €60 million, 75% of which was covered by the German Federal Ministry of Education and Research. The US, Russia, Czech and Spain also chipped in.

The KATRIN measuring device has a total length of 70 meters and is made up of six sections:

In short, the KATRIN device is basically a gigantic vacuum chamber – the air pressure inside resembles that on the surface of the moon – with a stable temperature and a mighty magnetic field shielding it from outside influences. The goal: to measure the energy of the electron as it is emitted by the hydrogen isotope, tritium. Thereby the researchers should be able to deduce and compute the energy and thus the mass of the simultaneously emitted neutrino. This calculation is based on Einstein’s famous equation E = mc2, wherein mass and energy are convertible.

Although the tritium source was installed last, perhaps even more spectacular is the story behind the installation of the main spectrometer tank: it was manufactured in 2006 in Upper Bavaria from stainless steel and weighs about 200 tons. Its inner diameter is nearly 10 meters, its total length more than 23 meters and it holds a volume of 1400 m3 – comparable in form and size to a grounded zeppelin.

Because of its massive size, the tank had to take a voyage reminiscent of Homer’s Odyssey: although manufactured only some 400 kilometres from Karlsruhe, the device was too big to be transported directly to Karlsruhe and had to be shipped via the Danube river through Austria, Hungary, through the Black Sea, the Mediterranean Sea and the Atlantic to Rotterdam in the Netherlands. From there it was taken down the Rhine river to a harbour near Karlsruhe.  In the end, instead of a journey of approximately 400 kilometres, the spectrometer underwent a two-months journey and covered roughly 9000 kilometres. It reached its final destination on 29 November 2006 and is the world´s largest ultra-high vacuum vessel.

Previous measurements in Germany and Russia have estimated the mass of one neutrino to be no more than 2 electron volts – which is already a billion times smaller than the mass of any other known subatomic particle. However, because of their ubiquity, neutrinos very likely played a huge part during or right after the Big Bang and the origin of the universe and they may very well affect the future of the universe as well. Knowing their exact mass will allow physicists to decipher their cosmological effect. 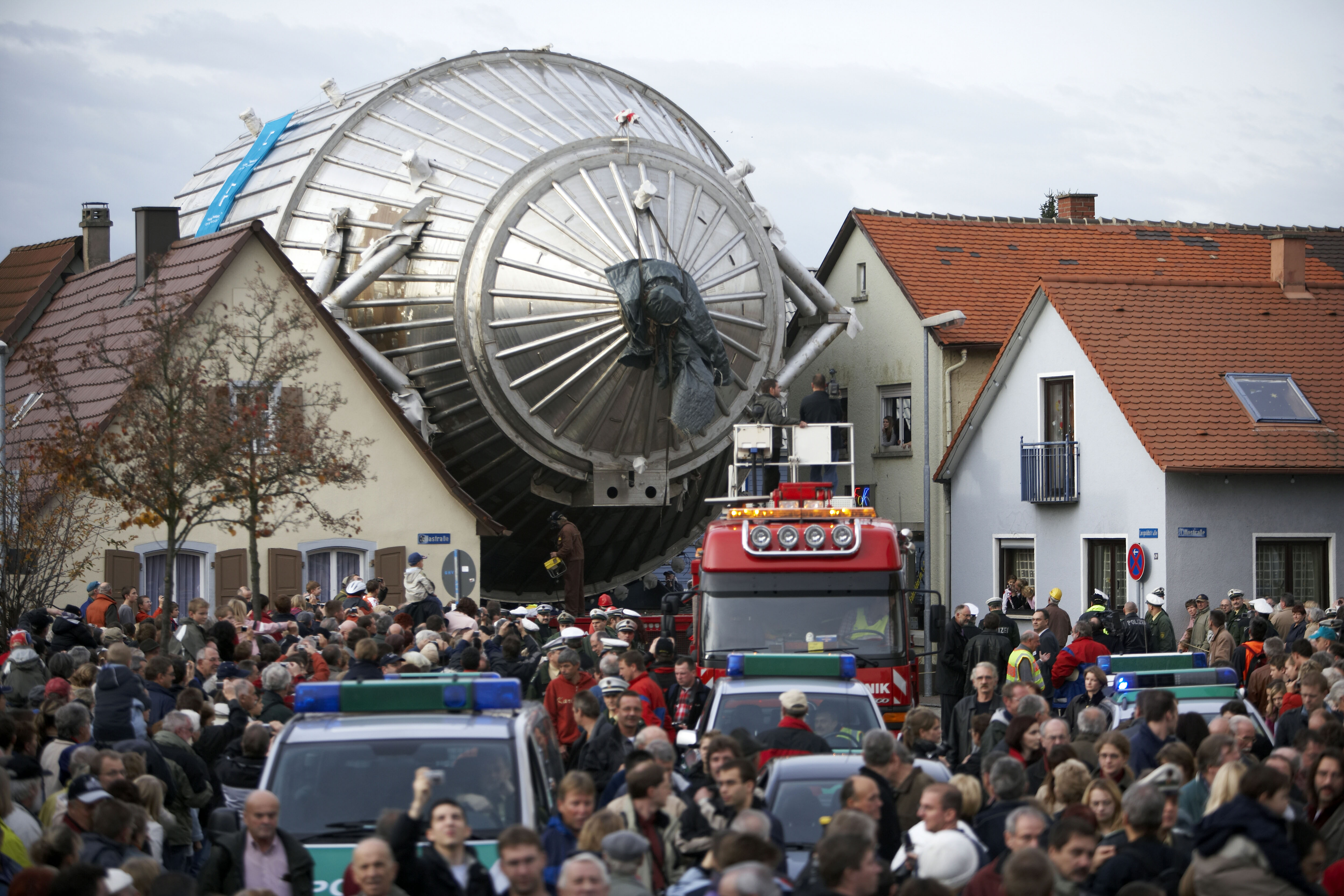 The last part of a long journey: Following its voyage around Europe, the giant main spectrometer of the KArlsruher TRItium Neutrino experiment KATRIN was loaded from the Rhine ship on a low loader with the help of the largest mobile heavy-duty crane in Europe and subsequently transported through the center of Leopoldshafen to the Karlsruhe Institute of Technology. Photo/Credit: KIT