Pushing Laser Intensity to Its...
Back

Back-to-back complementary lectures by Donna Strickland and Gérard Mourou, two of the most recent recipients of the Nobel Prize in Physics, kicked off the first full day of the 69th Lindau Nobel Laureate Meeting. The two physicists shared half of 2018’s Nobel Prize for their joint work on the creation of ultrashort high-intensity laser pulses, which today has a wide range of medical and industrial applications, from eye surgery to data storage.

The groundbreaking research, which has led to the shortest and most intense laser pulses ever made by mankind, comprised the foundation of Strickland’s doctoral thesis while under Mourou’s mentorship. At roughly the same age as many of the young scientists in the audience, she co-invented a technique that truly revolutionised the field of laser physics.

“So I’m here to tell you about what I did for my PhD that got me the Nobel Prize. Why was I the student of Gérard Mourou that got to do this work?” said Strickland at the start of her lecture. “It’s because I was the only one in his group trying to do high-ordered, non-linear optics, and so I needed a really intense laser.”

In the beginning of her dissertation research, Mourou gave her a 1973 theoretical paper by Stanford physicist Stephen Harris titled “Generation of Vacuum-Ultraviolet and Soft—X-Ray Radiation Using High-Order Nonlinear Optical Polarizabilities.” It explored the possibilities of getting coherent radiation to other parts of the electromagnetic spectrum, since all the lasers at the time were in the visible and infrared. Harris proposed getting to the X-ray and ultraviolet regimes with higher-order harmonics.

From there, Strickland came up with the idea to measure the ninth harmonic of an Nd:YAG laser impinging on a nickel plasma. For such an experiment, she needed a short laser pulse with sufficient energy. However, the development of increasingly intense short laser pulses had hit a wall by the mid-1980s, with anything above a terawatt power level leading to destruction of the amplifying material.

That is, until Strickland and Mourou invented a new technique called chirped pulse amplification (CPA) to get around this issue and amplify short laser pulses to unprecedented levels without ruining the optical components. 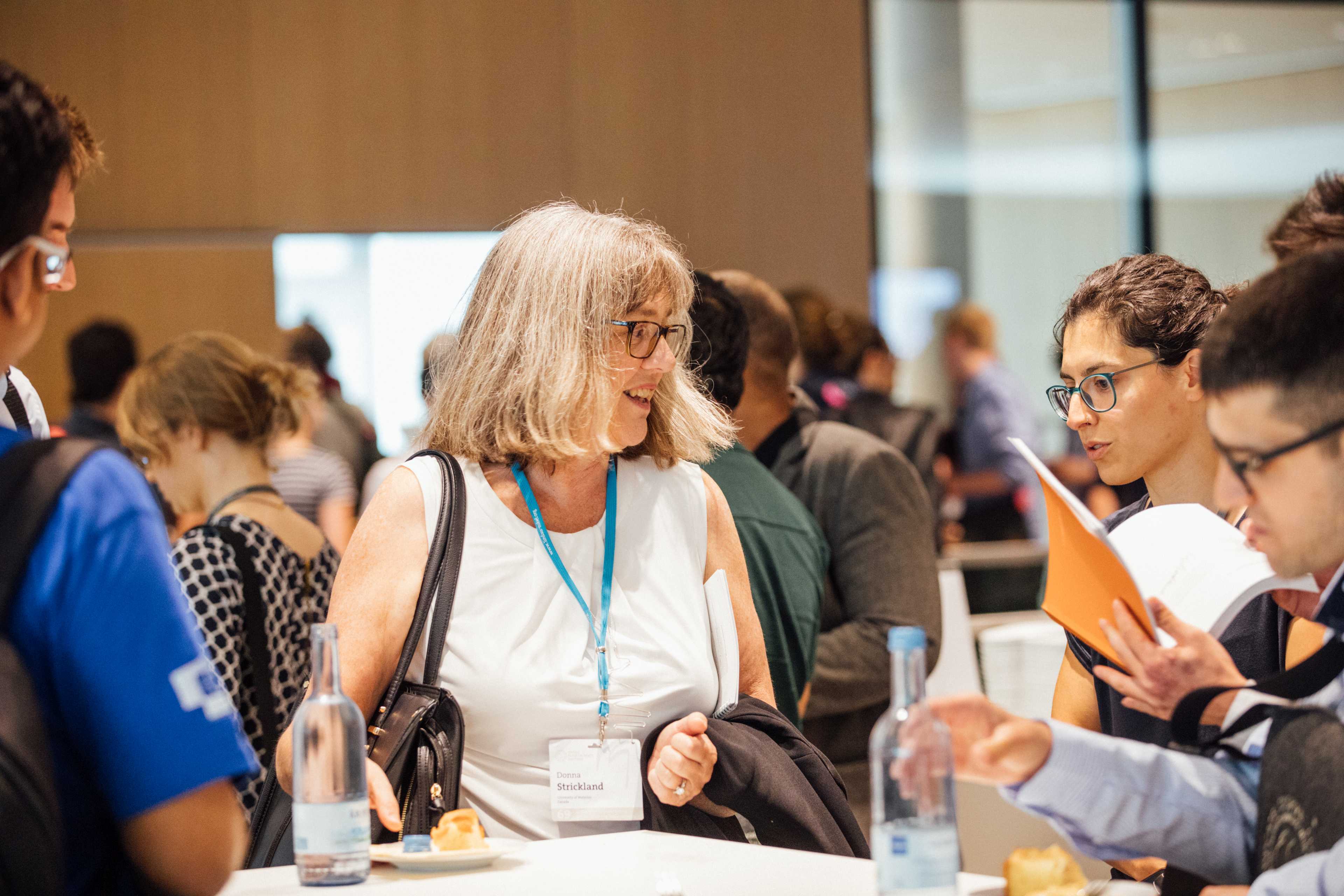 “We want this very short, intense pulse – which I like to call the laser hammer – for your application or experiment. You simply don’t want that hammer in your laser amplifier,” she said. “So if you start with a short pulse and stretch it so it’s good and safe, then you can amplify it up. And then at the end, you compress it.”

In their original implementation of CPA, a short, nanojoule pulse from a mode-locked Nd:YAG laser was coupled into a single-mode optical fiber and stretched to a duration of about 300 picoseconds. The pulse was linearly chirped in the fiber and then amplified by a Nd:glass regenerative amplifier. Finally, the pulse went through a double-grating compressor for a final duration of 2 picoseconds and a final energy of 1 millijoule.

The experimental process wasn’t a walk in the park, however, and Strickland mentioned to the audience how she actually broke the 2.5 kilometer-long optical fiber that nearby company Corning Glass had generously donated: “When I put the light through, it didn’t come out. And when I checked, there it was. I had broken it almost in the middle… I just used the 1.4 kilometers that I had.”

But of course, Strickland and Mourou eventually proved that CPA worked like a charm and published their seminal paper in 1985. Their technique became standard for all high-intensity lasers that followed, and other groups continue to build on their work in an attempt to create even more powerful laser pulses.

Mourou stepped onstage next to describe some of the research in high-intensity laser physics that came after the invention of CPA and what the future of the field holds. From applications in quantum optics that allow one to use laser light to slow down and cool atoms, to relativistic optics where laser-matter interactions are dominated by the relativistic character of the electrons, he described his never-ending fascination with light and its versatility.

Although he contributed a huge breakthrough to the field with CPA, Mourou wants to continue this line of research by finding innovative ways to up the intensity of lasers – from the 10^24 or 10^25 W/cm^2 we’re currently at to a whopping 10^29 W/cm^2. Upping the pulse energy of a laser can be quite costly, so he notes that shrinking the duration of a laser pulse is a better shortcut to higher peak power. 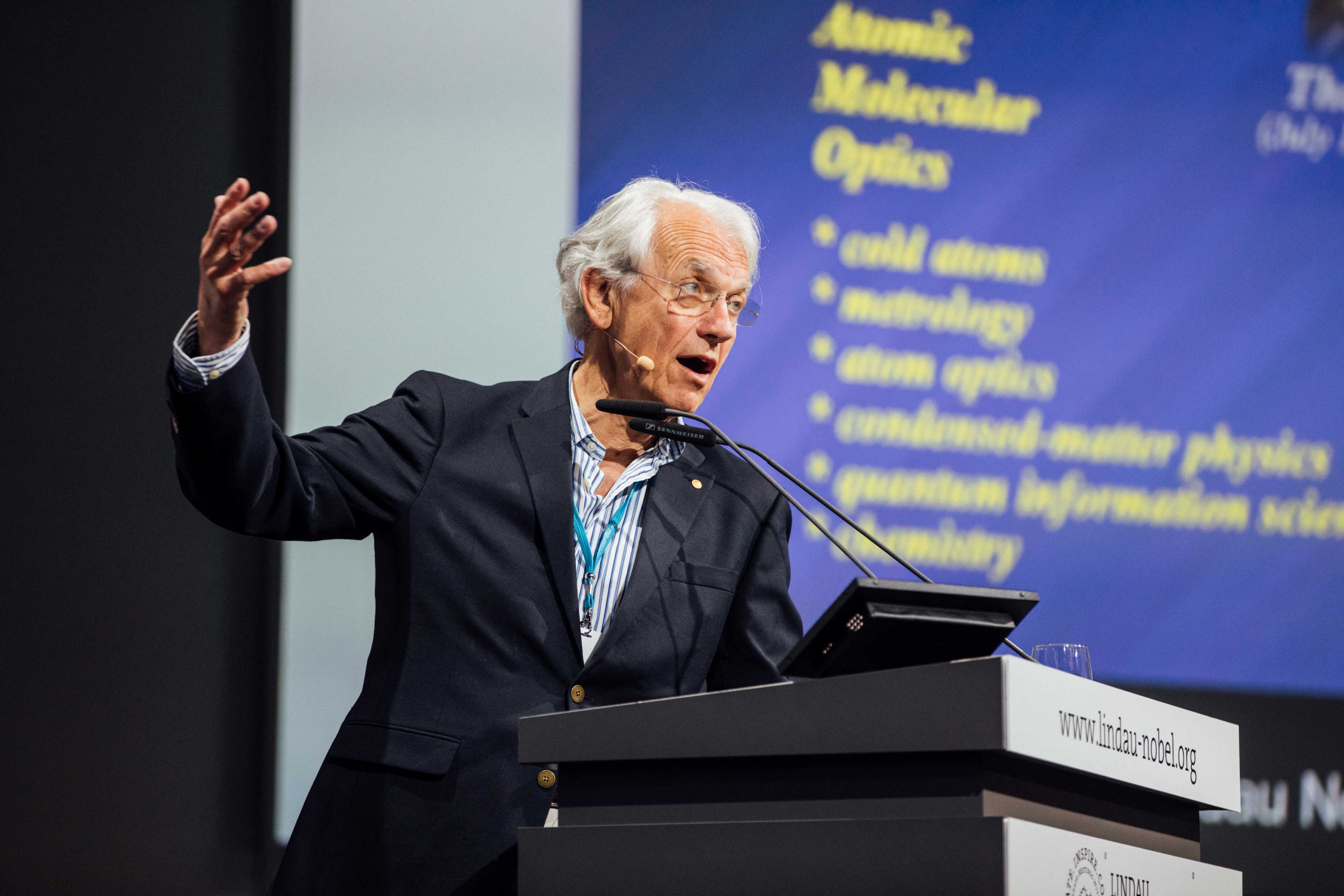 While CPA was originally demonstrated with low-energy laser pulses, researchers have recently harnessed the ability to compress petawatt and even higher energy laser pulses with tens of joules of energy. The interaction of these ultrashort pulses with a relativistic plasma mirror – formed when a pulse ionises a solid surface – results in further compression, opening up a whole new set of attosecond and zeptosecond applications.

“You could use them for very important applications in astrophysics because now you can really produce these very high energy particles, which are impossible to produce now and which are only produced in the cosmos somewhere,” said Mourou. “Also, you could try to understand some of the things that happen in gamma ray bursts. Here we could have zeptosecond pulses to compactify the cosmos in some way and study it on a table in a laboratory.“

Mourou ended his lecture with a passion project of his: using these high-intensity lasers to mitigate the impact of nuclear waste. Although this particular application is likely several years away, he believes that lasers could shorten its lifespan from thousands of years to minutes through a process called transmutation. Mourou and his colleague Toshiki Tajima want to create a high-speed laser-driven accelerator to produce a beam of neutrons that can penetrate atoms and change the composition of their nuclei.