Organs-On-A-Chip: The Future of Drug...
Back

In 2006, six healthy men who participated in a seemingly harmless clinical trial for a new drug were instead left fighting for their lives with multiple organ failure. At Northwick Park Hospital in London, each had received an intravenous infusion of an antibody called TGN1412. German pharmaceutical company TeGenero initiated the first-in-human trial of TGN1412, developed to direct the immune system to fight cancer cells or reduce arthritis pain, after successful tests in animals.

Within 90 minutes of the infusion, all six developed a potentially fatal immune reaction with early symptoms like diarrhea, severe headache and vomiting. The volunteers became critically ill over the next 24 hours and were transferred to the intensive care unit. Episodes of respiratory and renal failure occurred in the following days, and they required mechanical ventilation, dialysis and plasma infusion.

Even though the men fortunately survived, the TGN1412 tragedy shocked the scientific world and revealed the true risks of human clinical trials. The infusion that brought them to the brink of death contained a dose 500 times less than the amount that had been safe in animal studies. In an investigative report, the United Kingdom’s Medicines and Healthcare Products Regulatory Agency failed to find any flaw in trial procedure or in manufacture of drug and concluded that the severe reactions were as a result of “unpredicted biological action of the drug in humans.”

The disastrous TGN1412 trial emphasizes the lack of physiologically relevant preclinical models that can predict human responses to new drugs. But what if an entire human lung, heart or kidney — or even the whole body — could be mimicked by a microchip for this sole purpose? 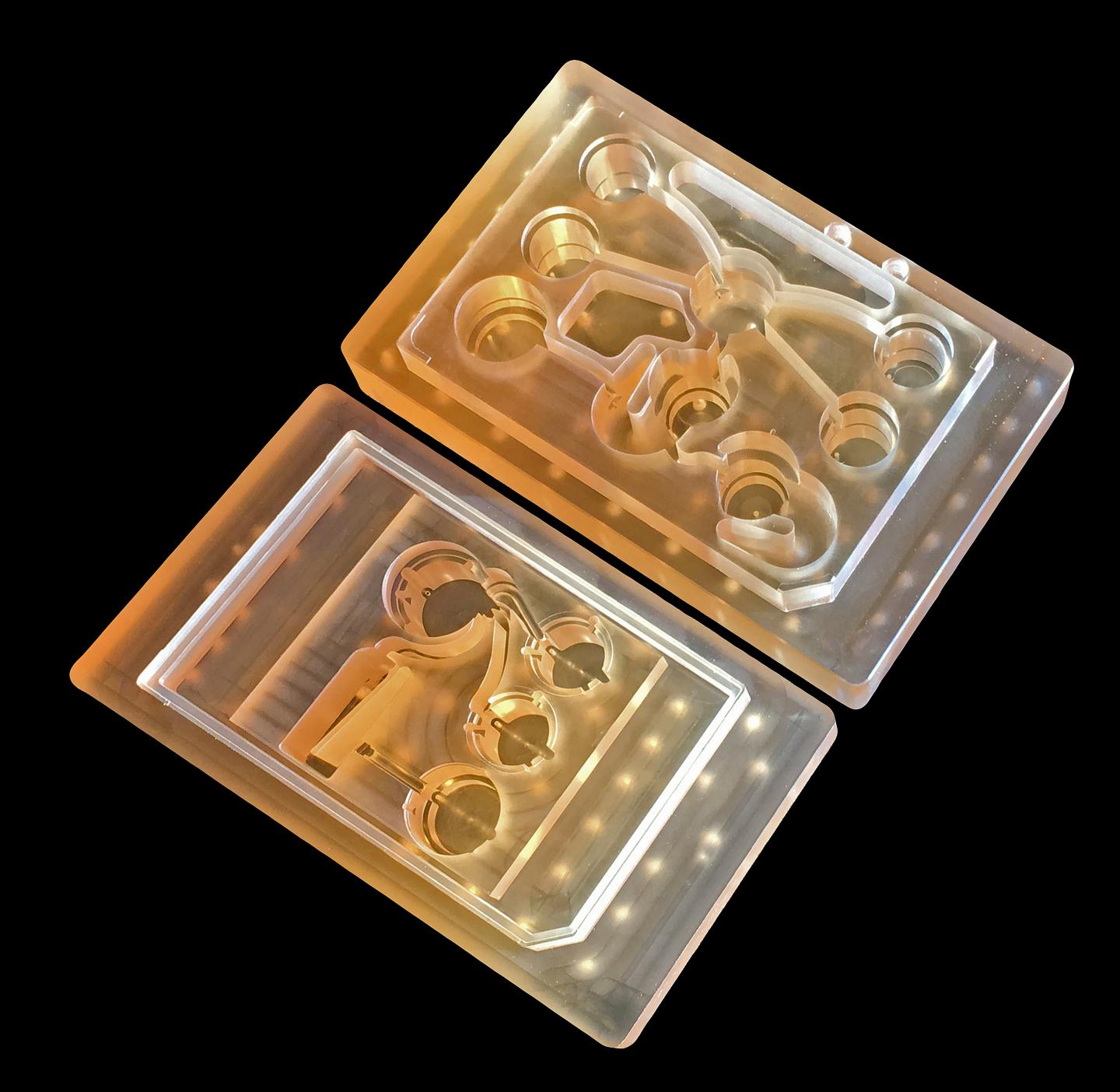 Researchers at the Massachusetts Institute of Technology have developed a microfluidic platform that connects engineered tissues from up to ten organs. Credit: Felice Frankel

Recent research has led to the development of what are called “organs-on-a-chip” (OOCs) to test the effects of drugs as an alternative to animal experiments, which may produce results inconsistent with human trials. These 3D microfluidic cell culture chips — about the size of a USB stick — are made of a translucent, flexible polymer lined with living human cells that can simulate the mechanics and microenvironment of an organ.

While initially developed to create computer chips, microscale engineering technologies like replica molding, soft lithography and microcontact printing allow researchers to manufacture these tiny model organs. The base material is polydimethylsiloxane, a biocompatible silicon-based organic polymer, which serves as a support for tissue attachment and organisation. From there, a biomaterial such as collagen acts as the extracellular matrix and scaffolding for the organ cells.

Since 2010, OOC models have been developed for the brain, lung, skeletal muscle, heart, skin, kidney, liver, gut and bone. But the goal for many laboratories is a full “human-on-a-chip” that would bring together several organs of the body for drug and therapeutic studies. Last year, a team of researchers announced the production of an integrated three-tissue OOC system comprised of liver, heart and lung. The resulting drug responses depended on interactions among the three tissue types, which reinforces the need to combine multiple tissue or organ types within a single microfluidic device. And earlier this year, engineers from the Massachusetts Institute of Technology created a microfluidic platform that connects engineered tissues from up to ten organ types.

Although the OOC remains an in vitro platform, it aims to replicate the in vivo environment of an organ with fabricated microwells, fluidic channels and porous membranes. It goes far beyond the conventional 2D cell culturing platforms, which feature a monolayer of cells to which a drug is then added. Such oversimplified models fail to capture the 3D cellular microenvironments in the human body, making it difficult to know how the drug will act once inside a person.

While some 3D cell culturing platforms have now been developed, such as cell aggregates and spheroids, they cannot capture any mechanical or electrical changes in cells. For instance, lung cells experience significant mechanical stress during inhalation, and the changes in surface-area-to-volume ratio that result play a critical role in gas exchange.

The first lung-on-a-chip, reported in 2010, had three embedded channels: two side channels and one main channel divided in half lengthwise by a membrane. The suction pressure within the two side channels could be controlled to stretch the centre membrane and mimic the mechanical stress during inhalation. Meanwhile, the porous membrane was seeded with cells to replicate the alveolar-capillary barrier in the lungs. In a toxicology experiment, the researchers added various nanoparticles to the alveolar microchannel and found that cyclical mechanical strain can accentuate the toxic and inflammatory response of the lung. 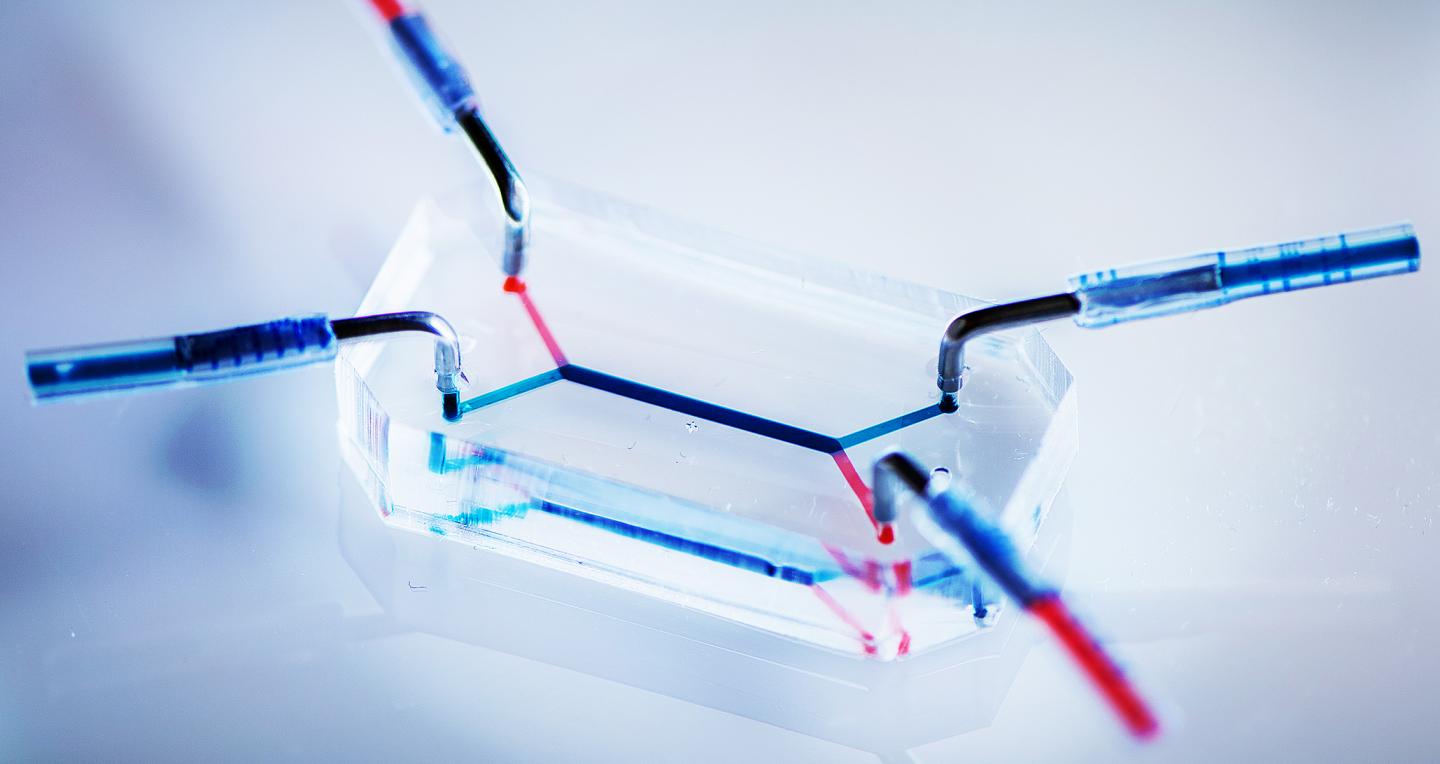 Several laboratories have created hearts-on-a-chip to study different aspects of the cardiovascular system, such as the effects on drug delivery when stimulated with electrical and mechanical forces. A study that focused on liver-on-a-chip combined it with two other organ modules — uterus and breast — to test the toxicity of a chemotherapy drug after being metabolised by the liver. And a gut-on-a-chip has been developed to recreate the intestinal human environment in order to test the absorption of oral drugs. The applications for OOCs seem endless, as the field continues to expand and evolve. Lastly, a lab at the University of Pennsylvania recently made a placenta-on-a-chip to mimic the placental barrier between the maternal and fetal circulatory systems.

Then, of course, there are the practical advantages of OOCs such as saving on cost, time and labour. Spending on drug development over the last two decades has increased in the U.S., while the number of new drugs approved annually by the Food and Drug Administration has declined. Today, the cost of developing a new clinically applicable drug is nearly $2.5 billion U.S. dollars, and the drawn-out process itself takes 10 to 12 years on average. To curb the cost and time of drug development, some experts believe that OOCs could eliminate ineffective drug candidates as early in the process as possible.

While the research on OOCs continues to progress, much work is still required before a human-on-a-chip system becomes standard for drug development. Current models, even those that incorporate multiple tissue types, remain too simplified for researchers to rely heavily on. In the future, some experts foresee a modularised approach with libraries covering all levels and types of organs, and laboratories can then easily combine prebuilt modules for a specific application.