How did we get here? Are we alone in the universe? These are two of the most fundamental and important questions everyone from leading astronomers to schoolchildren have asked when gazing up at the stars. Yet until relatively recently, these questions were purely philosophical. For truly scientific and quantitative contributions to our understanding of the evolution of the universe and Earth’s place in the cosmos, James Peebles, Michel Mayor and Didier Queloz have been awarded the 2019 Nobel Prize in Physics. More specifically, Peebles took half the prize for “theoretical discoveries in physical cosmology”, and Mayor and Queloz shared the other half for “the discovery of an exoplanet orbiting a solar-type star”.

Peebles, a professor emeritus at Princeton University, can be regarded as one of the main founders of physical cosmology – a discipline that applies the laws of physics to the entire universe. His first seminal contributions to the field were motivated by the 1965 discovery of the cosmic microwave background (CMB), for which Arno Penzias and Robert Wilson were awarded the Nobel Prize in 1978. In the same year as the CMB discovery, Peebles, his mentor Robert Dicke and two other colleagues constructed a basic explanation of the CMB as the Big Bang’s fading afterglow. Moreover, using the CMB temperature detected by Penzias and Wilson, they extrapolated back to near the beginning of the universe, calculating the temperature of the “primordial fireball” to be more than 10 billion °C. Physical cosmology was born.

In 1966, Peebles went further, offering detailed calculations for how and in what quantities protons and neutrons, and then atomic nuclei formed in the early universe, revealing that only the most basic elements could have been produced during the Big Bang, contradicting prevailing thought from preceding decades. His continued interrogation of the CMB offered profound insights into how much matter was created in the Big Bang and how this matter then clumped to form galaxies and galaxy clusters. Furthermore, this early body of work cemented dark matter as a key component of the universe.

Peebles went on to make important contributions to almost every cosmological mystery. For instance, he advanced the theory of cosmic inflation, a period of exponential expansion at the start of the Big Bang invoked to explain why the universe looks like it does today. He was also instrumental in explaining the universe’s current rapid rate of expansion by reviving Albert Einstein’s cosmological constant, now commonly referred to as dark energy – an anti-gravitational effect infusing and expanding space everywhere. These contributions laid the groundwork for the development of the Standard Model of Cosmology – Lambda Cold Dark Matter (ΛCDM).

Looking back at his achievements, Peebles can safely be regarded as a key author of the story of our universe as we now understand it. Yet his impact is perhaps more fundamental than that, because he has shown us the way to improve and extend that story, by using physical cosmology to illuminate dark matter and dark energy, and even attempt to answer how the universe began.

No less important to humanity than how we got here is the question of whether we are alone. To even start to answer this question, astronomers and astrophysicists needed to know whether the Solar System was unique or one of countless planetary systems in the Milky Way. 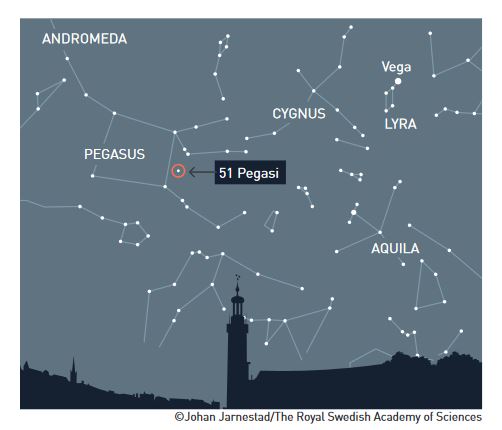 The first planet orbiting a solar-type star to be found outside our solar system is in the Pegasus constellation. It orbits a star called 51 Pegasi, which is only visible with the naked eye when it is really dark. However, the four stars that form the Square of Pegasus are easy to identify.

As recently as 1994, no exoplanets orbiting Sun-like stars had been discovered (though two planets orbiting a pulsar were detected in 1992). Michael Mayor and Didier Queloz dramatically transformed this situation on 6 October 1995, when they announced the first definitive detection of an exoplanet orbiting a main-sequence star – 51 Pegasi.

At the time of their discovery, the researchers were based at the Haute-Provence Observatory in France. There, they built a custom spectrograph to precisely measure the spectrum of light coming from a star. Naming it ‘ELODIE’, they used the device to see if any of 142 different stars displayed a tiny wobbling motion indicative of the gravitational tug of a planet, which would be registered as a periodic shift in the spectral lines of the observed star.

51 Pegasi – sitting just 50 light-years away from Earth – was the only one with this hallmark wobble. Quickly confirmed by other observatories, the wobble was shown to be caused by a closely orbiting Jupiter-like planet named 51 Pegasi b that was rapidly circling around its host star once every four days.

Though not a planet with conditions conducive for life, the discovery of 51 Pegasi b ushered in a new era of exoplanetary discovery. Over that time, Mayor and Queloz’s technique has been refined and other methods for detecting exoplanets invented. As of November 2019, 4093 exoplanet discoveries have been confirmed, according to NASA’s Exoplanet Catalog.

The rich variety and abundance of these exoplanets have forced astronomers to change their models of planetary formation. And more detailed information about these worlds has revealed that, though barren gas-giants like 51 Pegasi b are common, terrestrial worlds are abundant too – some with atmospheres and water, and a select few ticking all the boxes for potential habitability, and possibly even life.

This year’s Nobel Laureates in Physics, Peebles, Mayor and Queloz, have lit the way for other astronomers to answer two of the deepest cosmological questions facing humanity. The ones who finally answer how the universe began and whether we are alone in the universe will owe a debt to these three trailblazing researchers.