On the morning of 9 October, John Goodenough was brushing his teeth when a colleague entered the bathroom. They had just had a call on their mobile phone: Goodenough had won the Nobel Prize in Chemistry 2019. It was the first time a laureate heard about their award thanks to the very breakthrough that was being celebrated.

Goodenough, along with Stanley Whittingham and Akira Yoshino, was being recognised for his role in creating lithium-ion batteries, the small miracles of science that brought power to our pockets and launched the age of mobile technology.

Batteries have been around for 200 years. They are made up of cells, each storing electricity as chemical energy. They consist of three parts: two plates, called the anode and cathode, and an electrolyte in between. When a battery is added to a circuit, a series of chemical reactions occur, which vary depending on the metals and electrolyte used. These reactions result in negatively charged electrons gathering at the anode and positively charged ions moving to the cathode. The electrons want to get to the cathode but are blocked by the electrolyte. The only way around is by flowing along the electrical circuit, generating a current and causing the battery to power your device.

The problem with a standard battery is that once the reactions have finished, it can’t produce any more electrons – the battery is flat. This is where rechargeable batteries come in. These can reverse the flow of electrons, returning the anode and cathode to their original state and allowing the battery to be used again. The first rechargeable battery was made using lead plates with a sulfuric acid electrolyte in 1859, and is still widely used around the world, particularly in cars. But lead-acid batteries are big, bulky and heavy, so can’t be used for portable electronics. An entirely new type of powerful, lightweight battery was required.

Lithium is the lightest metal on the periodic table (the only elements lighter are hydrogen and helium), and has a high energy density, which makes it ideal. In 1976, Whittingham, a British chemist working for Exxon Mobil, made the first rechargeable battery with lithium as its anode. In his battery, lithium ions moved through the electrolyte and inserted themselves in a cathode made from titanium disulphide. This insertion of the lithium was reversible, so Whittingham’s battery could be recharged thousands of times without losing effectiveness. Best of all, lithium-ion batteries stored about ten times as much energy by weight or volume when compared to lead-acid alternatives. 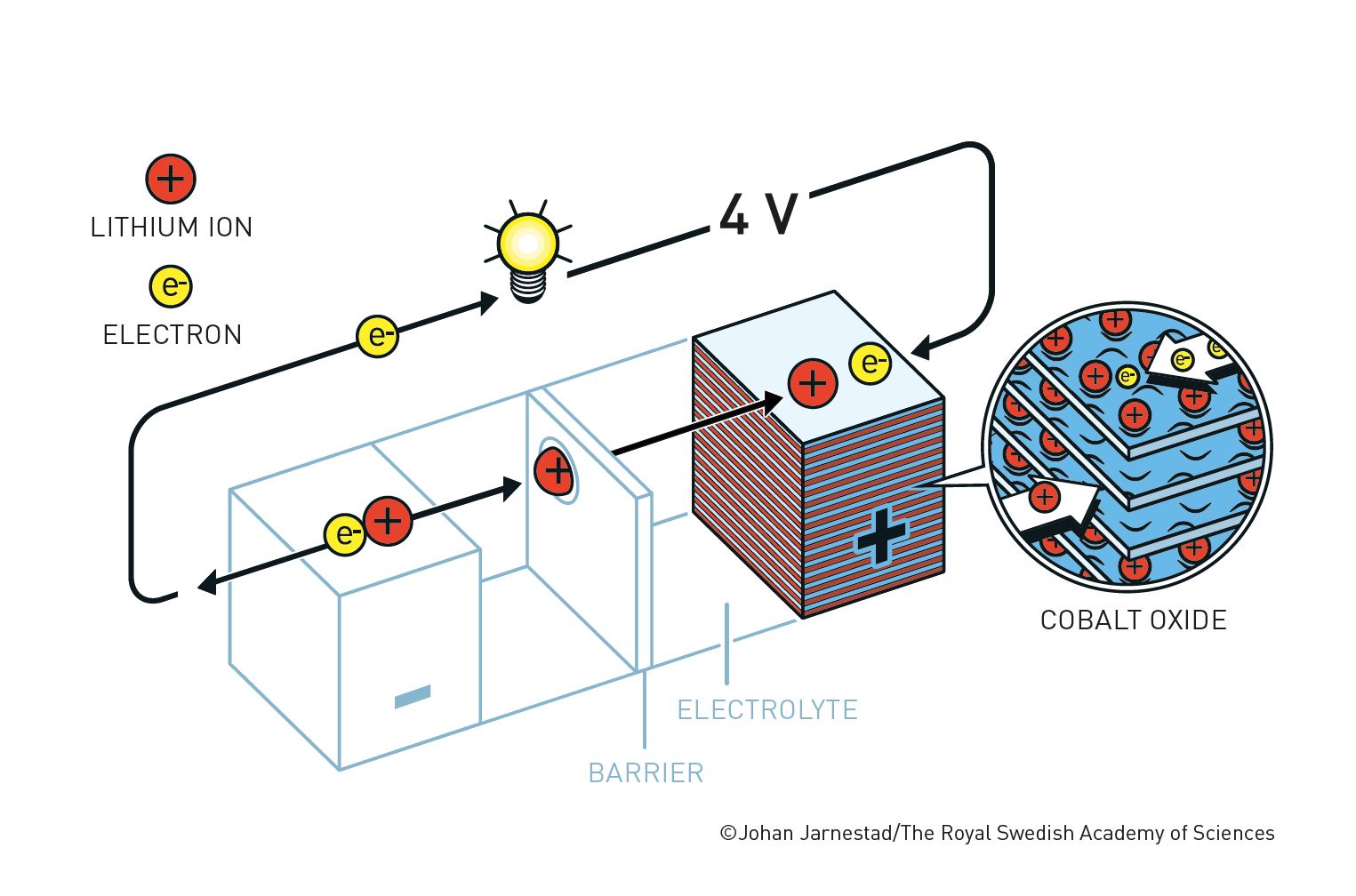 Unfortunately, Whittingham’s design had a major fault. The chemical reactions caused whiskers of metallic lithium to form and stretch out through the electrolyte. Eventually, these whiskers would grow so large they would touch the cathode, resulting in a short circuit that ignited the electrolyte and started a fire. Whittingham’s batteries were also too expensive to be mass produced and tended to explode if shaken.

But Whittingham’s battery had inspired Goodenough. Based at Oxford University, the American physicist was no stranger to world-changing technology: in the 1950s he had invented RAM, which is essentially the short-term memory of a computer. Rather than build his battery in a charged state, Goodenough decided to create a battery that was discharged instead. During the 1980s, his team created a cathode to layers of lithium cobalt oxide – a stable structure that effectively sandwiches the lithium ions in place. They found that about half the lithium ions could then be charged and result in a battery that could produce 4V: almost double Whittingham’s design.

The battery revolution just needed someone willing to take the ideas to market. In Japan, Yoshino was working for Asahi Kasei. His team kept Goodenough’s cathode, but changed the all-metal anode based on petroleum coke, which houses lithium ions in its lattice. This removed all the metallic lithium from the battery, preventing the dangerous whiskers. Yoshino also came up with additional safety measures. A thin, porous membrane was added to separate the anode and the cathode. This meant if a battery overheated, the membrane would melt and seal off the two compartments. Finally, Yoshino also installed a small aluminium cap that popped if gas built up inside. The lithium-ion battery as finally ready to make portable electronics a reality. 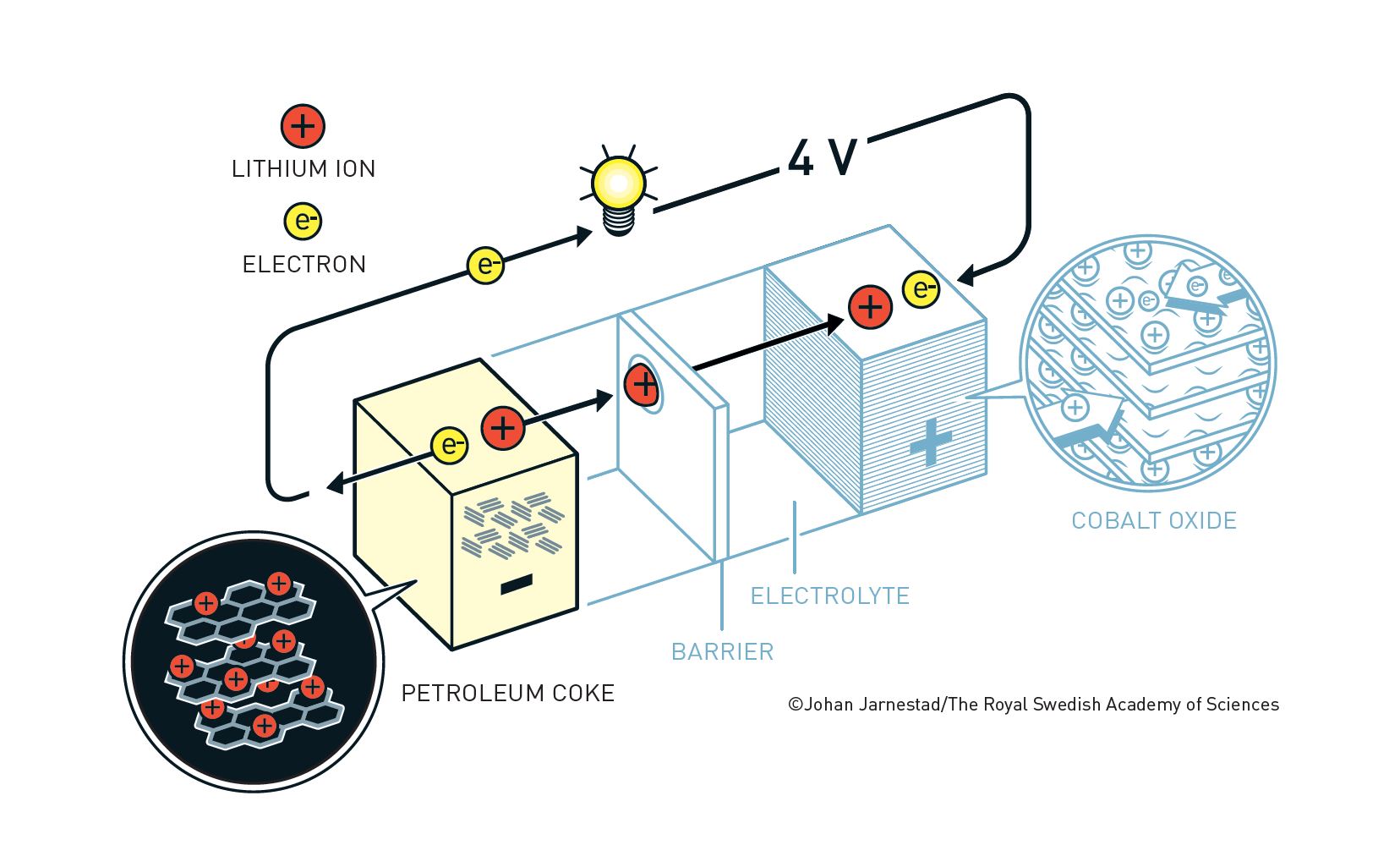 In 1991, Sony released Yoshino’s battery. And, as the batteries improved and became slimmer, longer-lasting and faster-charging, their uses became more widespread. Today, lithium-ion batteries power the modern world, used in everything from mobile phones and laptops to electric cars. In fact, they are now so popular that chemists are currently looking for alternatives to lithium as it’s likely the world’s supply will be exhausted.

If the Nobel Prize is meant to celebrate truly world-changing achievements, it’s hard to think of more worthy recipients than Goodenough, Whittingham and Yoshino. All three continue to work in their labs even though Goodenough, at 97, is the oldest person to win the Nobel Prize. “I wanted to be an explorer,” he told Chemistry World. “And science is a pretty good place to go exploring.”

Kit Chapman is an award-winning science journalist and communicator. Formerly an editor for Chemistry World, Kit has also written for Nature, New Scientist, The Daily Telegraph and BBC Science Focus among others. His first book, Superheavy: Making and Breaking the Periodic Table, is a finalist for the 2020 AAAS and Subaru SB&F Prize for Excellence in Science Books.