Francis W. Aston with the first mass spectograph that was set up in the Cavendish Laboratory at the University of Cambridge, UK, in 1919.

Francis W. Aston was a man of many talents, from glass blowing to playing the piano, as well as being possibly the only surfing Nobel Laureate – he learned in Honolulu in 1909. But it’s for his achievements as an experimental scientist extraordinaire that the physicist and chemist is better known.

This year, it’s 100 years since Aston built his first mass spectrograph, a device capable of measuring the relative masses of individual atoms and molecules. His spectrograph, together with the findings he made with it, was to win him the 1922 Nobel Prize in Chemistry and launch the field of mass spectrometry.

Born in 1877 in the midlands of England, Aston studied chemistry and physics at Mason College in Birmingham. In a time when advances in physics were coming thick and fast, the undergraduate was particularly thrilled by Röntgen’s discovery of X-rays using a Crookes tube in 1895.

It inspired him to investigate the electrical discharge of gases in the tubes after he graduated. His choice was to be fortuitous. Joseph J. Thomson, one of Britain’s leading physicists, shared Aston’s fascination, and in 1909, he invited Aston to work as his assistant at the University of Cambridge. Thomson had heard of the talented experimentalist through a mutual acquaintance. 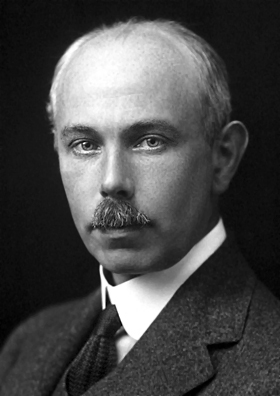 Thomson had already been awarded the Nobel Prize in Physics, in 1906, for his work in gas discharge tubes. He had correctly deduced that cathode rays were a stream of negatively charged sub-atomic particles – the electron. He then turned his attention to the simultaneously produced positive rays. His work was to pave the way for a new field of mass spectrometry.

Thomson used electric and magnetic fields to deflect the rays, recording the deflections on photographic plates placed in their path. The set-up produced traces in the shape of parabolas on the plates, as the particles comprising the rays were deflected through a range of angles due to a spread in their velocities.

More crucially, however, rays from different elements hit the plates at different locations. Their unique signatures were a consequence of their charge and mass – the fundamental properties determined how much the ions comprising the rays were deflected by the fields.

Aston was to make several contributions to the set-up that improved its performance significantly and, in 1912, the pair took advantage of them to investigate naturally-occurring neon. Except, the gas produced two parabolas instead of one. It was the first evidence of multiple isotopes in non-radioactive elements, but, at that point, the concept of an isotope was still very new and Thomson had significant doubts that this was what they had measured.

Aston set out to investigate the intriguing finding further, attempting, largely unsuccessfully, to separate the two species. His work was then interrupted by World War I and he only returned to the lab in 1919. By then, the concept of the isotope had been widely accepted, increasing suspicion that both were neon.

Consequently, Aston began designing a more powerful device to provide convincing evidence of the two isotopes – his prize-winning mass spectrograph. It was the first of three he was to develop, where each was an order of magnitude more accurate than the previous one.

His spectrograph still used electrostatic and magnetic fields, but Aston changed their orientation and applied them sequentially at different locations. The result was an electromagnetic ‘lens’ that focussed the rays generated by a given element onto a single point instead of a parabola. The more intense spots enabled superior measurements.

In the same year he returned to the lab, he began experiments using his new spectrograph, quickly confirming the existence of neon’s two isotopes with masses of 20 and 22 to an accuracy of one in a thousand. They were the first of 212 isotopes that he discovered in his career – he was to dominate the field.

Aston also demonstrated that isotope masses only occurred as (approximately) integer values: his whole number rule. The finding was an important contribution towards understanding the structure of the atom. It gave rise to an early model of the atomic nucleus that contained electrons and protons and whose mass varied according to the number of protons. At that time, the neutron had not yet been discovered.

But there was more: his meticulous measurements also demonstrated small but significant deviations from the whole number rule. They were due to the binding energy of the atomic nucleus, a concept fundamentally important in nuclear power and nuclear weapons. Aston went on to investigate more deeply with his second mass spectrograph. In his prize acceptance speech in Stockholm in 1922, he presciently recognised it to have profound implications – good and bad – for the human race.

Whether he anticipated quite how widely mass spectrometry would be used today, across the sciences, in research, industry and beyond, is another question. After commercial mass spectrometers became available in the 1940s, it became a staple technique for chemists in identifying and characterising molecules. Since the 1980s, the Nobel prize-awarded ionisation techniques of electrospray ionisation (ESI) and soft laser desorption (SLD) have also enabled the analysis of large biomolecules, making mass spectroscopy an invaluable tool for biologists.

A diverse range of applications include art conservation, drug testing, explosive testing in airports, environmental and climate monitoring, pharmaceutical development and palaeontology. In medicine, mass spectrometry is routinely used to screen new born babies for metabolic disorders, while intelligent scalpels that help surgeons determine if they have removed all of a tumour from a patient are also under development. The list goes on, making mass spectrometry another classic example of how, in basic science research, you really never know where it all might end up.