Hot and Cold: Laser Technology...
Back

In 2018, Arthur Ashkin, Gérard Mourou, and Donna Strickland were awarded the Nobel Prize for Physics for their “groundbreaking inventions in the field of laser physics”. Ashkin created something that seems taken straight out of science-fiction: tools made of light, the so-called ‘optical tweezers’. Meanwhile, Mourou and Strickland paved the way for the shortest and most intense laser pulses ever created by mankind which, in addition to being a remarkable achievement in itself, opens up a whole new world of possibilities.

In fact, lasers have already been used in many more ways than the technology’s pioneers envisioned. Let’s have a look at some of the ways through which lasers are changing the world.

What makes a laser special is that it emits a coherent source of light – in other words, the wave source will always have the same frequency, waveform, and phase difference. This allows a myriad of applications for laser beams, including, among others, manipulating very small (even atom-sized) objects.

Like any electromagnetic wave, a laser beam carries energy and momentum, which it can transfer to a particle in its path. This interaction is substantially impacted by objects’ refractive index, which is a measure of how fast light propagates through the material. By carefully considering the differences in refractive index between an object and its surrounding medium, a laser can be tuned to physically hold and move objects, acting like a very precise tweezer.

The groundwork for optical tweezers was laid out in 1970 by Arthur Ashkin, who was then working at Bell Labs, New Jersey. However, it wasn’t until 1986 that Ashkin and colleagues demonstrated the first true optical tweezers – or as they called it back then, the “optical trapping of dielectric particles by a single-beam gradient force trap.”

Optical tweezers have been used to trap a multitude of objects, including viruses, bacteria, metal particles, and even strands of DNA. There is great potential for applications in the life sciences, with some studies suggesting that optical tweezers might be pivotal in the detection and treatment of diseases such as cancer.

However, Ashkin isn’t the only Nobel Laureate to use optical tweezers: one of his colleagues at Bell Labs, Stephen Chu, had different plans for this technology. He wanted to employ them to cool atoms down – very, very down.

Along with his colleagues Claude Cohen-Tannoudji and William D. Phillips, Chu utilised optical tweezers to capture objects much smaller than Ashkin did, as little as 0.1 nanometers in diameter. They also developed something they call “optical molasses.” Essentially, optical molasses use focused laser atoms to create a viscous-like environment for neutral atoms, slowing down their movement and thus, cooling the atoms to ungodly temperatures: just 0.000001 degrees Kelvin above Absolute Zero.

Rather unexpectedly, this technology is used every day for GPS. In the 1970s, the US military deployed several GPS satellites, although the technology wasn’t available for civilian use until the 1980s. GPS works by capturing the time of arrival and time of flight from a device to a satellite and back. At least three satellites are necessary to establish a position, and a fourth one is needed for altitude. Of course, the more satellites can be accessed, the better the quality of the positioning. As more and more satellites are deployed, GPS performance improved, but another crucial improvement came from these cooled atoms.

Considering the scale of sending a signal to orbit and back, even extremely small inaccuracies can produce massive positioning errors. In order to reduce these errors, the time must be measured with absolute precision, and this is done with something called an atomic clock. Atomic clocks are the most accurate time and frequency standards known, using a cooled-down atom oscillator as a timekeeper.

Long theorised since 1905, when it was proposed by Henri Poincaré, the existence of gravitational waves wasn’t confirmed until very recently – and it was a massive breakthrough. Albert Einstein predicted their existence in his general theory of relativity, but it wasn’t until a large-scale, ambitious setup was carefully deployed, that they were actually detected.

The Laser Interferometer Gravitational-Wave Observatory (LIGO) uses laser interferometry to study very small displacements over large distances. Between mirrors located 4 km away from each other, the LIGO setup is able to sense differences less than a ten-thousandth the charge diameter of a proton. With this, LIGO has made eleven detections of gravitational waves, confirming this natural phenomenon and enhancing our understanding of the universe we live in.

This achievement was also awarded the Nobel Prize in 2017, when the award was given to Rainer Weiss, Kip Thorne and Barry C. Barish “for decisive contributions to the LIGO detector and the observation of gravitational waves.”

It doesn’t necessarily have to be high-end scientific research, however. The humble barcode and scanner have revolutionised the retail world, but it wouldn’t have been possible without lasers. 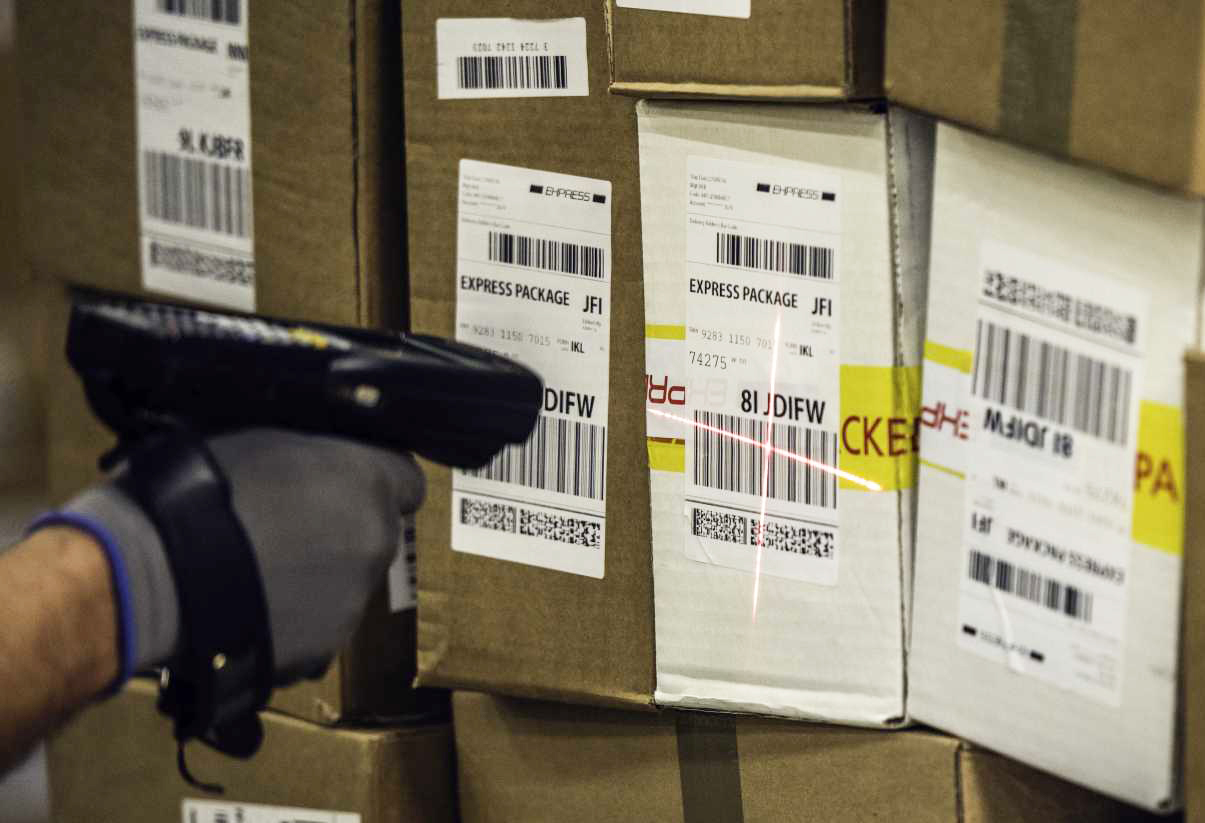 “The humble barcode and scanner have revolutionised the retail world, but it wouldn’t have been possible without lasers.” © iStock/simonkr

The idea of using barcodes goes down a long time, and the technology they use is fairly simple but very efficient. Laser scanners are by far the most common barcode scanners, using a red diode laser to read the reflectance of black and white spaces in a set space. The first patent for a barcode was issued in 1952 as US Patent 2,612,994, but the first application came a few years earlier, as N. Joseph Woodland, a graduate student at the Drexel Institute in Philadelphia, was working on ways to improve the tedious process of checking out items in a shop. The first item checked out with a barcode was a pack of chewing gum, selling for the price of $0.67. It didn’t take long for the familiar zebra-type pattern to become ubiquitous.

For all their simplicity, barcode scanners have become a vital part of today’s business environment, changing retailing and manufacturing forever. It enabled quicker deliveries without a need to manually check the packages and containers, paved the way for automatic merchandise and package handlers, and forever changed the way we shop. Today, it’s hard to even imagine how life would be without this simple, laser-based invention.

Lasers in Medicine: From Tattoo Removal to Cancer Therapy

Another area where lasers have become widespread is in the field of medicine. Lasers have become so mainstream in medicine that there’s even a scientific journal solely for communicating advances in this field.

The first medical application of lasers dates from 1962 when an experimental laser was used for the ablation of atherosclerotic plaques. A decade later, an argon laser was used for homeostasis in the upper gastrointestinal tract, and since 1978, lasers have been used to eliminate some types of cancers.

Laser therapy uses powerful lasers to shrink or destroy tumours and precancerous growths. A more specialised approach has been developed in the form of Photodynamic therapy, a treatment that uses a drug and a particular type of light – most commonly a laser to produce a form of oxygen that kills nearby cancerous cells.

These are just a few of the ways lasers are being used in science today – many of these uses would have probably come as a major surprise to laser pioneers, and there’s an important lesson herein: often times, it’s hard to predict just how and where an invention will be used. That’s why even basic scientific research with no clear applications should be supported.

‘Laser physics’ will be one of the main topics of the 69th Lindau Nobel Laureate Meeting. Among the 39 Nobel Laureates attending this year’s meeting will be the newly minted laureates Donna Strickland and Gérard Mourou as well as Steven Chu, Claude Cohen-Tannoudji and William D. Phillips. A profound interview with Arthur Ashkin about his fascinating life can be watched in our mediatheque.