From ‘Star Wars’ to Geophysics
Back

It’s Christmas 2017, many families are spending some quality time together, going to the cinema and watching the newest Star Wars episode ‘The last Jedi’. As the movie culminates in an epic battle on the mine-planet Crait, a young physicist in the last row of the cinema gets very excited: there it is, right in front of everybody’s eyes and in the middle of pop-culture, the thing she has devoted a whole PhD project to: salt deserts! Serving as the otherworldly scenery of a planet far away from earth, the Salar de Uyuni and its iconic salt polygons flash past, while fighter planes whip up red dust as they fly low over the salt crust.

Salt polygons did not only fascinate the filming crew of Star Wars, they also draw millions of tourists to the salt flats of the Badwater Basin in California or the Salar de Uyuni in Chile every year. Standing in the middle of such a salt flat, you can immediately realise that something is going on there, driving the salt crust to shape itself into well-ordered polygons rather than unordered randomness. Yet, that ‘something’ remained unknown for a long time: it was hypothesised that the salt crust is simply cracking or, following a different theory, wrinkling, as it runs out of space to grow horizontally. But none of these theories could explain the size and shape of the polygons: hexagons with a diameter of one to two metres.

This is where physics comes in. There is a process which can explain this length scale as well as the polygonal shape very nicely, if we put in the numbers for an average salt desert: that process is convective overturning of a fluid. This process forms convection cells, squeezing in next to each other, their boundaries forming a hexagonal pattern. But for this to happen, we would need a fluid in the first place, and deserts are dry, aren’t they? Well, these salt flats often lie at the bottom of a geographical sink. They are the lowest point in the region and rainwater from the surrounding areas flows towards them, transporting minerals, which accumulate in the sink. The salt crust on the surface is only a very thin layer of salt, sitting on top of a sandy soil which is often completely saturated with salty water. So now we have a wet desert – but where does the convective overturning come from?, you might ask. As we are still in a desert and the climate is rather hot and dry, water evaporates through the surface of the salt flats at a high rate. As the water evaporates, the salt it carried stays behind and accumulates close to the surface. Now, saltier water is heavier than less-salty water. Therefore, we end up in a configuration where a layer of heavy fluid sits on top of the less-heavy fluid below. This configuration can become unstable, as the heavy fluid wants to sink down and the less-heavy fluid tries to rise. And there we have it: convective overturning. Just as in our heaters, warmer and cooler water mix through convection, in salt deserts the salt gradient drives convection as well. Where the water is saltier, the salt crystallises with an increased rate at the surface and ridges form, tracing the edges of the convection cells in the underground. Therefore, the salt ridge polygons we see on the surface are a mere reflection of the dynamics that go on in the underground below the patterns.

This Was All Theory: How Do We Find out If It Is True?

Digging holes in the desert and measuring the salt concentration in the soil directly below the patterns reveals, that there is indeed a significant difference in salt concentration below the patterns: downwellings of salty water occur below the ridges, while upwellings of fresher water are located at the centers of the polygons. The overturning of convection cells in nature is rather slow for human standards, as it takes months to years to establish. Therefore, we need different tools to investigate the dynamics of the phenomenon: In analogue experiments in the laboratory, where we can drive the system much faster by heating and ventilating it, it is possible to observe the dynamics on a scale of hours and days. Additionally, we can model the dynamics in numerical simulations, where we can try out a large range of parameters, which would be hard to investigate in nature or in the experiment.

Following these approaches, we find out that the mechanism driving the pattern formation, convection, is very robust to changes in parameters. In other words, no matter if the desert is hot or very hot, the sand is fine or coarse and the water is saltier or less salty: convection will almost always occur. Moreover, the convection cells that establish will also always tend to have the same size. They might start out a little larger or smaller but, as time goes on, they always settle on the size of about one to two meters. That is why we always find the same patterns of the same shape and size in all salt flats around the world. 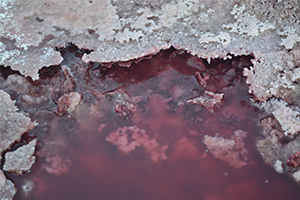 But What About the Red Dust?

If you have seen the Star Wars movie, you might remember the very cinematic sprays of bright red dust, being whipped up from the salt crust. One might think this is an artificial effect, introduced by the artists to make the scenery more epic. But there is a connection to nature as well. Salt deserts are home to an extremely extraordinary microorganism: the salt algae Dunaliella Salina. The algae have a flexible hull and are filled with glycerin, enabling them to withstand large differences in salt concentration without bursting, as ordinary cells would in such conditions. These algae can go to sleep and hibernate for months or even years if conditions are not optimal. But if they wake up and find conditions to be good, they bloom and create large amounts of beta carotene which has a bright red color. Therefore, if one peels away the thin layer of pristine white salt crust, a bright-red mush of water, salt and salt algae appears below. 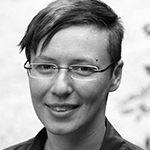 #LINO19 young scientist Jana Lasser is a postdoctoral fellow at the Max Planck Institute for Dynamics and Self-Organization in Göttingen, Germany. She studies nonlinear dynamics and their connection to patterns we see in nature. When not at the lab, she will be arguing fiercely, representing early career scientists and try to change the academic system for the better. She is passionate Open Science and teaching Data Science skills to every student at her campus.