From a Glass of Wine...
Back

DNA sequencing was the topic that has connected Lara Urban and Michael Feichtinger. Photo/Credit: jxfzsy/iStock

The so-called “social events”, where you have time to get to know the other participants personally, are usually just as much a part of Nobel Laureate Meetings in Lindau as the scientific programme. Sometimes these conversations even develop into a project. Such a success story is the cooperation of Lara Urban and Michael Feichtinger, who in 2018 struck up a conversation over a glass of wine in the evening and discovered common interests. Lara, a German geneticist with a Ph.D. from Cambridge, has been conducting research in environmental protection in New Zealand since 2020 as independent research fellow of Alexander von Humboldt Foundation, using an innovative DNA sequencing method. This process seemed promising to Michael as a focus for his practice. He deals with all topics concerning the wish to have children and recognized a possible application for gynecology in the device used by Lara. Now their joint paper on the subject has been published. We were able to talk to Lara about the project.

How did you and Michael find that there were substantive points of connection in your research? 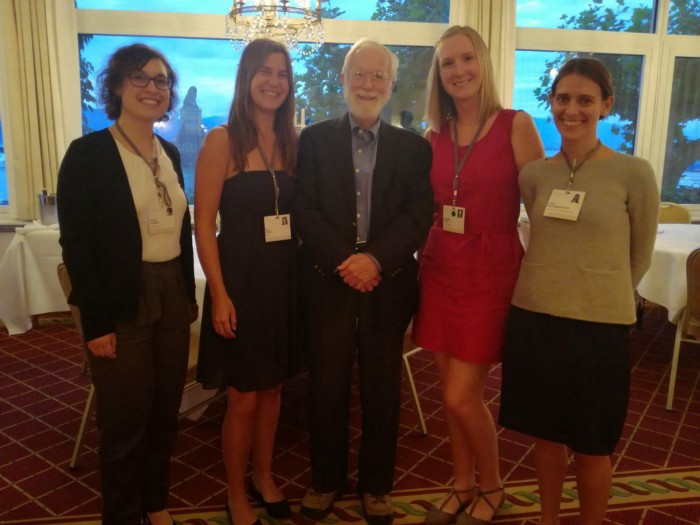 Lara (second from left) with Nobel Laureate J. Michael Bishop (Physiology or Medicine 1989) and other young scientists at #LINO18

One of the most exciting aspects of the Nobel Laureate Meeting in Lindau is the exchange with other scientists, especially with those who have a very different scientific orientation. At the time of my participation, I was using a smartphone-sized portable DNA sequencing device, the MinION, to study the bacterial composition of the local river in Cambridge. I started talking to Michael Feichtinger about this work during the dinner of the Opening Day. Michael works as a gynaecologist at the Wunschbaby Institute in Vienna. He was interested in my work on bacterial communities since certain bacteria found in the lining of the uterus might provide information about the success of in vitro fertilization (IVF). Diseases such as endometriosis can also be diagnosed more accurately by sequencing the microbiome from samples of the endometrium. Conventional sequencing machines are very large and expensive. When Michael heard that there might be a smartphone-sized and relatively cheap alternative, he was eager to learn more about it. He was very interested in being able to sequence the endometrial microbiome of women directly at his clinic. So we realised that we had a common interest in this sequencing technology, and this is how our collaboration started.

How did your collaboration continue after Lindau?

When I presented the results of my water analyses from Cambridge at a conference in Vienna, we took the opportunity to discuss a possible collaboration in more detail. I showed him the portable MinION, and he subsequently purchased such a device for the clinic. His colleague Anna Oberle is a molecular biologist who then carried out the analyses on site. She sequenced the endometrial microbiome of 33 women who had suffered from unsuccessful IVF. During this process, I was able to assist Michael and her with the experience I had gained in previous years using the sequencing device. Our scientific publication that has now been published in Reproductive BioMedicine Online constitutes pioneering work that will serve as a basis for future large-scale studies. We were able to show that it is possible to establish microbial sequencing of the endometrium in a clinical setting relatively easily – and to collect and evaluate data quickly and directly wherever the samples have been taken.

What is so special about this sequencer? 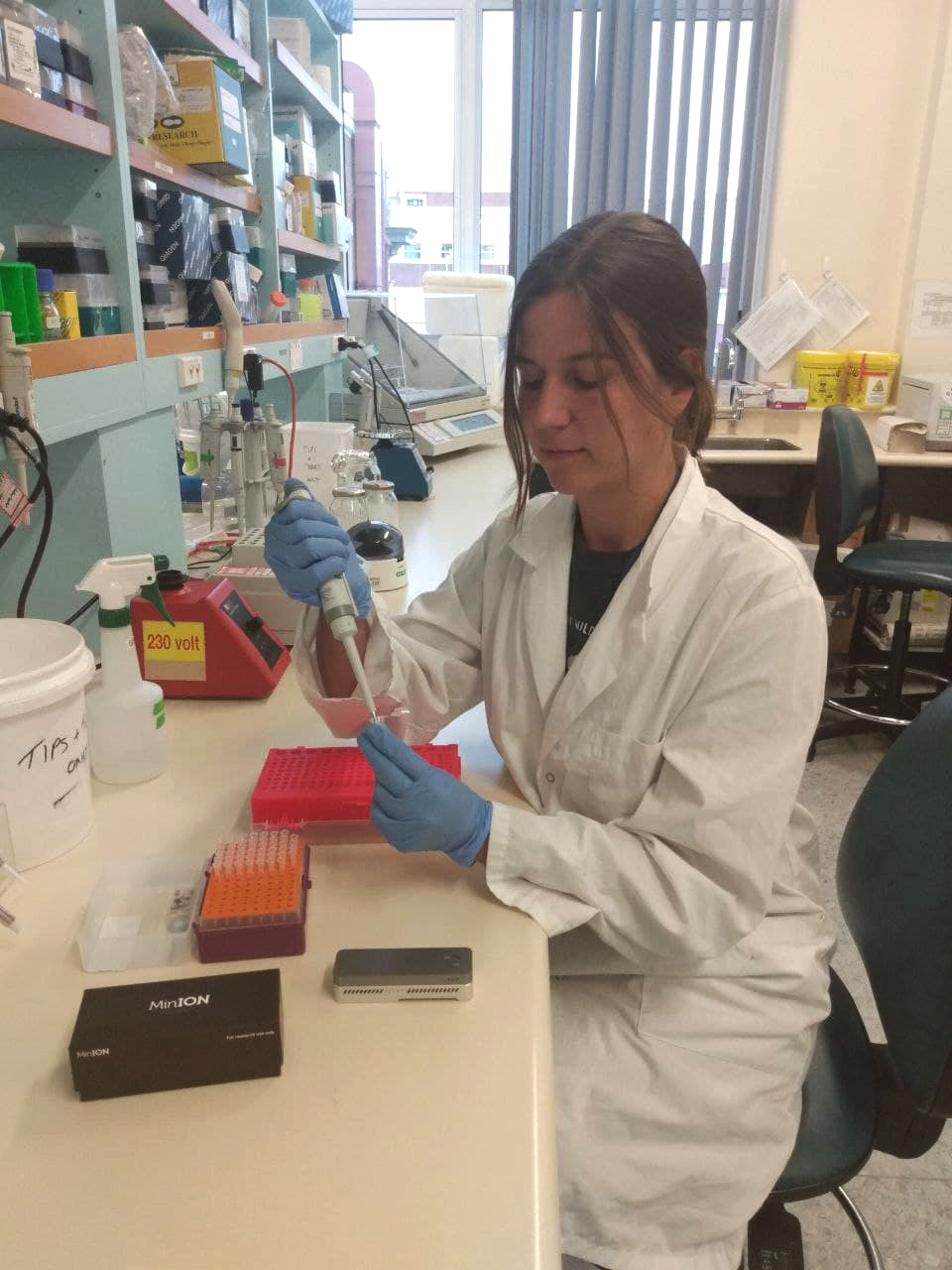 This method generates comparatively long DNA sequences. Convential sequencing delivers much shorter DNA sequences, which makes the generation of the final DNA more difficult – you can imagine it as if you had to assemble an entire book based on words. With the long reads, this is much easier – as if one had to assemble a book based on pages. Also, the MinION is super small and relatively cheap, so that it is easier for small projects and organisations to purchase and use it.

Where do you even use the MinION sequencer in your research?

Here in New Zealand, I am studying how genomic research can benefit the conservation of nature and its biodiversity. Amongst others, I am collecting genetic data from environmental material such as soil, air or water – from this DNA that was left behind by organisms in the environment, we can learn a lot about endangered species, for example about their distribution or their genetic diversity. Especially for this work, a portable sequencing device which can be used in remote places to obtain data quickly and on site can be very helpful. I am currently working on standardizing the use of the MinION for such applications.

How would you describe your cooperation? 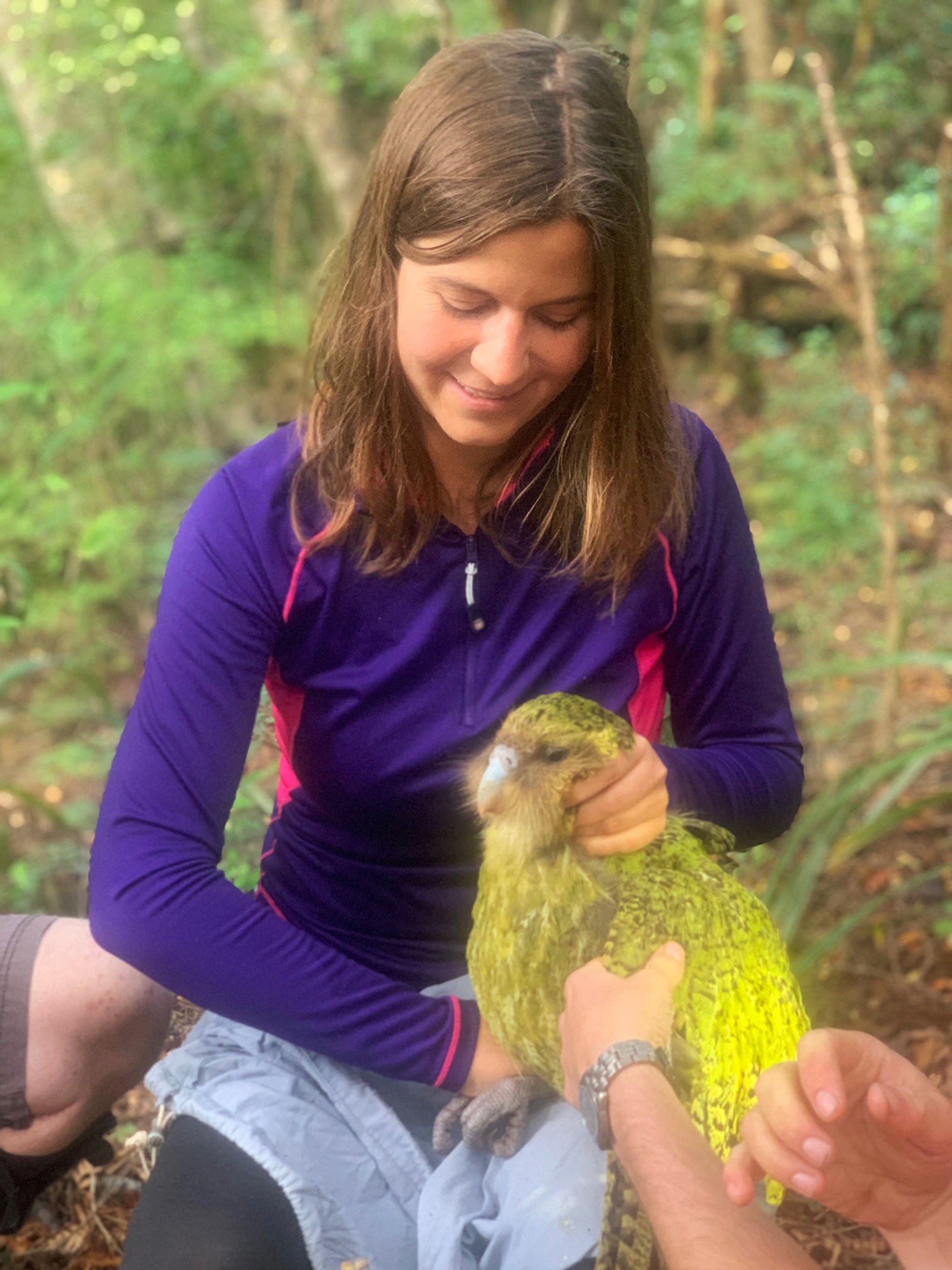 Lara with a kākāpō, one of the endangered species she is now working on in New Zealand

Everything went very smoothly – all three of us have some sort of biological background, so the communication was very straightforward. On the other hand, we have specialised in different research areas, so that our individual responsibilities were clear from the beginning. Even before COVID-19, the collaboration was exclusively digital due to the geographical distance, but it worked very well, we got along well and the project was a lot of fun.

What advice do you have for current and future “Young Scientists”?

I am very happy that I met Michael in Lindau – Lindau is an amazing opportunity to broaden your horizon by learning about other research areas and to expand your circle of scientific collaborators. Therefore, I advise everyone who participates in Lindau to approach the other participating scientists with an open mind and to have a conversation with as many people as possible – with both Nobel Laureates and the more junior participants. For me, it is the core of science to always discover something new – and here it helps to get to know different perspectives, methods and research areas.

Editor and part of the communication team of the Lindau Nobel Laureate Meetings.