Duncan Haldane: Toying with Topology
Back

Alongside David Thouless and Michael Kosterlitz, Duncan Haldane was awarded the 2016 Nobel Prize in Physics for realising that the mathematical theory of topology underpins the behaviour of certain exotic forms of matter.

Topology is the mathematics that describes properties of shapes like a sphere or a torus that don’t change. In the topologist’s world, a doughnut and a coffee cup are hard to tell apart because a doughnut can be smoothly deformed into a coffee cup and vice versa, since both surfaces have one hole. But a pretzel is topologically distinct because neither a doughnut nor coffee cup can morph into a pretzel without doing something extreme, like tearing a new hole or cutting the material.

What on Earth has this got to do with matter and the real world? If you think this all seems rather abstract, you are not alone. When Haldane submitted what would become his first seminal paper hinting at topology’s central role in explaining unexpected behaviour in certain exotic materials in 1981, it received strong resistance from the quantum magnetism community. In fact, it took two years, several rejection letters from different journals and multiple rewrites before the paper was finally published in ‘Physics Letters A’.

The paper itself was theoretical, and followed a ‘toy model’ approach Haldane had picked up from his former PhD advisor and future Nobel Laureate Philip Anderson. It imagined an idealised one-dimensional antiferromagnetic material, essentially a magnetic chain of particles with the quantum mechanical property of spin, which is a type of angular momentum defined by spin quantum number.

Picking apart this toy model, Haldane showed that its properties depend profoundly on whether the spin quantum number is an integer (1,2,3,…) or half-integer (1/2, 3/2,…) ­– in direct opposition to established theory at the time. More importantly, his work revealed that, in fact, these magnetic chains exhibit a topologically ordered phase – or a ‘gapped spin-liquid state’ – only when the quantum spin is an integer.

Being ‘gapped’ means that the quantum state has well-defined excitations in the form of particles. And being a spin liquid means that the complicated interactions between electron spins within the material impart a highly quantum mechanical behaviour, making it a distinct phase of matter. Just like how the number of holes an object has remains the same even if you shake or deform it, this phase’s robustness to perturbations is what makes it topological.

Later experimentally confirmed to exist in crystals of the organic chain molecule NENP, Haldane’s gapped spin-liquid state is now recognised as an early example of topological quantum matter, of which there is now a whole family. More broadly, it showed how abstract mathematics can beautifully describe real-world physics. 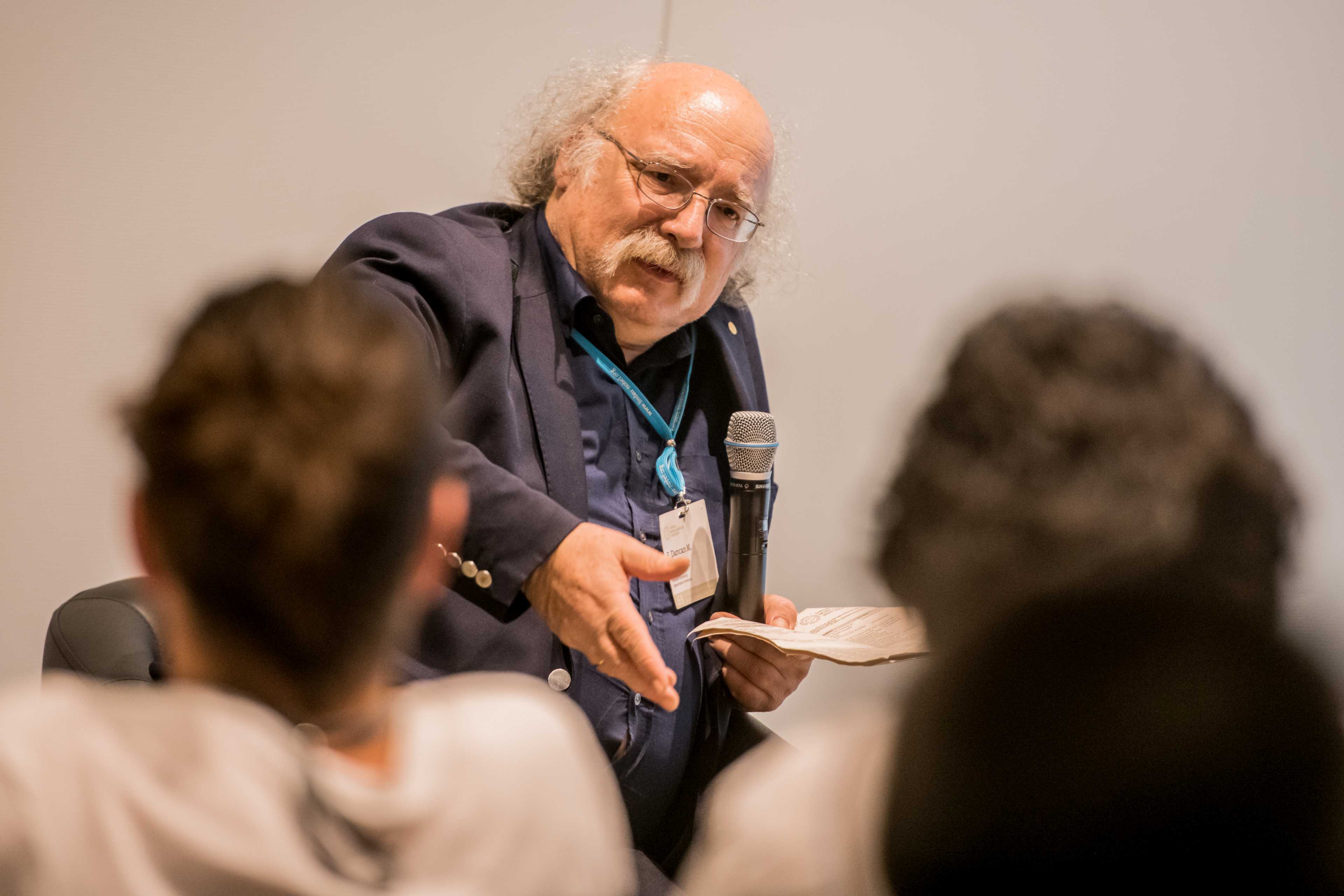 In his quantum spin chain work, Haldane had been inspired by topological arguments made by Kosterlitz and Thouless in the 1970s, where they had shown that certain thin films could exhibit superfluidity by switching between states that can be described as having different topologies. He was therefore highly interested when in 1982 Thouless and colleagues extended these topological arguments to help explain the mysterious properties of the quantum Hall effect – the striking and robust quantisation of electrical resistance observed in certain experiments on thin films.

Just a few years later, Haldane believed he had spotted an important consequence of Thouless’s quantum Hall effect explanation that had been missed by the community. Up to that point, physicists thought that the effect was always driven by a large applied magnetic field. Haldane, in contrast, believed it could arise purely from magnetisation within the material.

To prove this idea, he followed the same procedure that was so successful in revealing the underlying topology of spin chains: he built a toy model. He imagined a two-dimensional single sheet of graphite, now known as graphene – long before its discovery by Nobel Laureates Andre Geim and Konstantin Novoselov ­– for this, and in a 1988 paper showed that there is a topologically non-trivial state where the quantum Hall effect can occur just from magnetic interactions in the system.

Though Haldane immediately realised that the ‘anomalous quantum Hall effect’ he had described could have numerous practical applications, how to make it happen in a real-world experiment remained unknown for another two decades. In 2013, a breakthrough was finally made by a team led by Xue Qikun at Tsinghua University, who observed the effect for the first time in thin films of chromium-doped (Bi,Sb)2Te3.

This achievement was the first direct demonstration of intrinsic topological properties of a material, as all previous efforts had imposed topology via an external magnetic field. Opening a window into deeper understanding of topology in real-world systems, it has also led to an explosion of interest over potential applications. These include spintronic devices and dissipationless transistors and nanowires for future quantum computers.

Much of the work on topological materials happening today can be traced back to the first tentative steps made in 1981 and 1988 by Haldane with his highly idealised toy models. These deliberately simplified models were key to allowing the topological nature of quantum systems to come into focus. As he said himself: “Accurate details really do not matter if one is trying to understand the essence of some phenomenon, provided that the ingredients retained in the model are indeed the ones that matter”. In choosing the right ingredients, Haldane opened up a world of new physics, new materials and new applications that researchers are continuing to explore to this day.