CRISPR-Cas: The Holy Grail Within...
Back

“With great power comes great responsibility” – although most often attributed to the Marvel comic Spider-Man, this phrase has since become synonymous with new discoveries and techniques that harbour great potential but could also go terribly awry if not met with enough care. What might happen if the novel gene-editing tool CRISPR-Cas was employed without the greater good in mind, can be seen in the new Hollywood movie ‘Rampage’. This movie adaptation based on a video game portrays the disastrous, albeit not scientifically accurate, consequences of reckless gene editing, which results in the hero having to fight former friendly pet animals that have been turned into monsters with the help of CRISPR. Undoubtedly, CRISPR-Cas is one of the most ground-breaking scientific developments in recent years, but it is also still heavily debated among scientists and the public. So much so that even Hollywood took note.

But what exactly is CRISPR-Cas and how does it work? CRISPR (pronounced “crisper”) stands for Clustered Regularly Interspaced Short Palindromic Repeats, which are part of the bacterial “immune” system. Jennifer Doudna and Emmanuelle Charpentier, together with their postdocs Martin Jinek and Krzysztof Chylinski, developed the gene-editing tool, which uses RNA guide sequences specific to the target gene as well as the bacterial enzyme Cas9 to cut the target sequence out of the genome. If different Cas-enzymes accompany the RNA guide sequences, the system can also be programmed to insert or replace specific gene sequences. With these systems, researchers are able to permanently modify genes in most living cells and organisms. The break-through discovery was published in a Science paper in August 2012. The beauty of the technique: it is fast, cheap and relatively simple. As a consequence, the scientific community has seen a massive increase in CRISPR-related projects, papers and patents in the years since 2012.

In particular the medical research community adopted this new tool early on in the hope that precise DNA editing could eliminate genetic diseases and allow for targeted gene therapies to treat genetic causes of disease. In fact, recently, researchers managed to reduce the disease burden of such debilitating diseases as Huntington’s disease and muscular atrophy via targeted gene editing in mice. What is especially impressive about these first successful trials, is that the researchers have found a way to introduce the CRISPR-Cas system directly into the body. Previous approaches to improve immune therapies for certain cancers followed a different approach: blood or immune cells were isolated, their genetic code altered to better fight the tumour cells and then reintroduced to the body. For most tissues, however, this approach was not feasible. Thus, both guide RNA and enzyme had to be introduced directly into the body and aimed at their target tissue. However, both RNA and enzyme are large molecules, that don’t diffuse into cells easily and don’t survive well in blood. Therefore, some pharmaceutical companies have successfully started pairing the two components to fatty particles in order to facilitate their uptake into the cells. If these trials prove feasible, virtually any disease – from hepatitis B to high cholesterol – could potentially be eradicated by the CRISPR-Cas system. 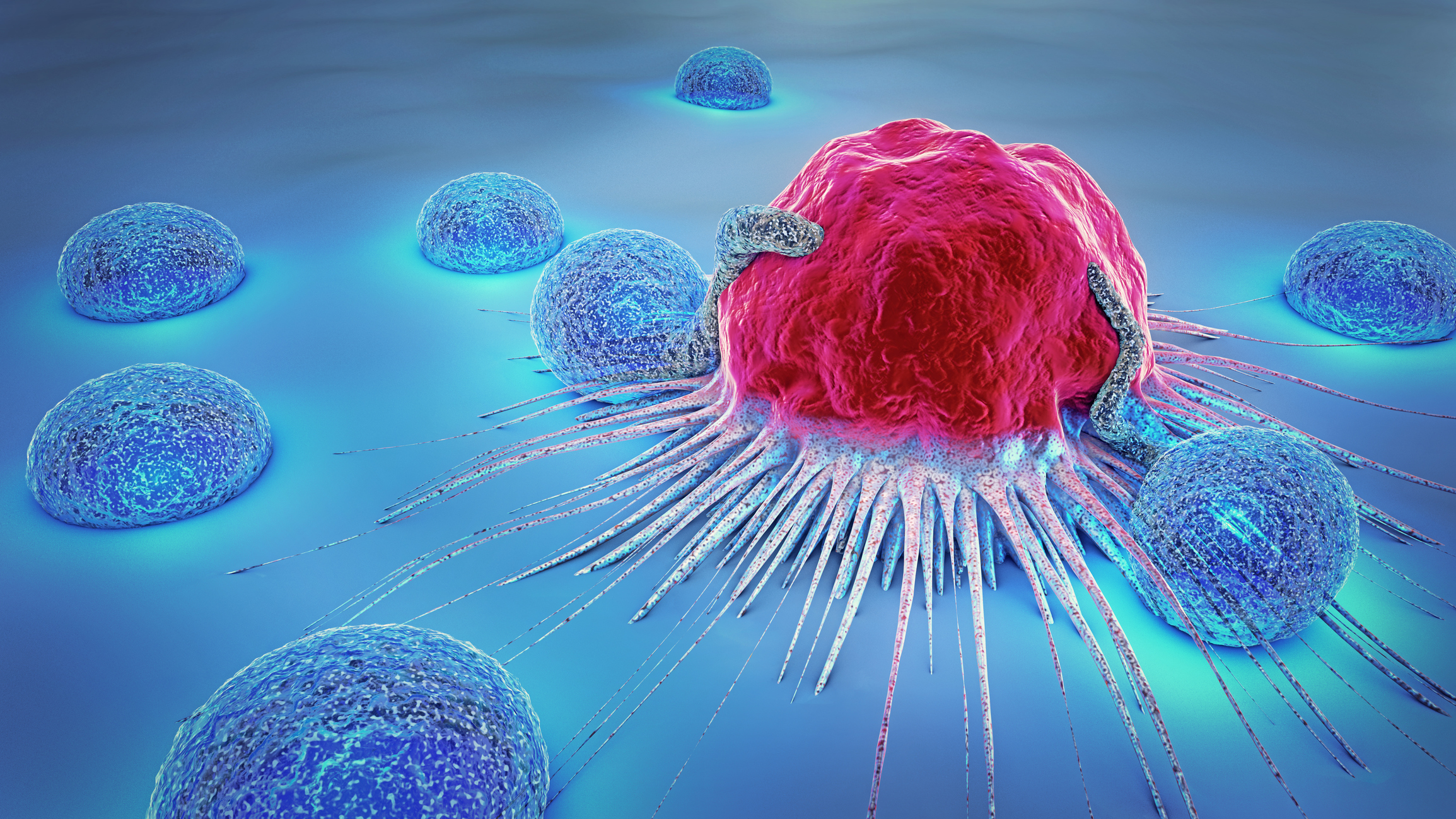 Moreover, the CRISPR system not only proves tremendously useful for treating diseases, it is also being used as a promising new diagnostic tool: SHERLOCK – another pop-culture icon, but here the acronym stands for Specific High Sensitivity Reporter unLOCKing.

In 2017, a team of researchers in Boston first described an adapted CRISPR-system in which the guide sequence targets RNA (rather than DNA) as a rapid, inexpensive and highly sensitive diagnostic tool. The end product is a miniature paper test that visualizes the test result via a colourful band – similar to a pregnancy test. According to the scientists, SHERLOCK can detect viral and bacterial infections, find cancer mutations even at low frequencies, and could even detect subtle DNA sequence variations known as single nucleotide polymorphisms that are linked to a plethora of diseases.

In a new study, published earlier this year, the researchers used SHERLOCK to detect cell-free tumour DNA in blood samples from lung cancer patients. Moreover, their improved diagnostic tool is supposed to be able to detect and even distinguish between the Zika and the dengue virus.

The detection rather than editing of genetic information is based on the Cas13a enzyme, a CRISPR-associated protein, which can also be programmed to bind to a specific piece of RNA. Cas13 could even target viral genomes, genetic information underlying antibiotic resistance in bacteria or mutations that cause cancer. After Cas13 has cut its target, it will continue cutting additional strands of synthetic RNA, which are added to the test solution. Once these additional strands are cut by Cas13, they release a signalling molecule which finally leads to the visible band on the paper strip. The researchers have developed their diagnostic test to be able to analyse and indicate up to four different targets per test.

However, it is also this seemingly tireless activity of the cutting enzymes of the CRISPR toolbox that have led many researchers to question just how targeted and controlled this enzymatic reaction can be. In May 2017, a paper in Nature Methods reported a huge number of unexpected off-target effects, essentially labelling the gene-editing tool as unsafe. The paper brought the heated debate surrounding the predictability and safety of this new tool to the forefront of the field; however, in March 2018, the paper was retracted, after several researchers called the methods and in particular the controls of the first paper into question. The off-target effects observed earlier might have been due to different genetic backgrounds of the mice rather than the employed CRISPR-Cas method.

Nevertheless, many researchers caution their colleagues that the CRISPR-system and its possible side-effects are not yet fully understood. Another piece of the puzzle could be a natural off-switch for Cas9 that has been found in another bacterium and that could help control the enzymatic gene-editing system in the future.

However, possible side- or off-target effects are by no means the only fodder for heated debates surrounding the CRISPR tool box: in 2015, Chinese scientists reported that they had edited the genome of a human embryo. Although the embryo was not viable, it sparked a heated ethical discussion and conjured up many negative connotations regarding genetically engineered humans.

Leaving possible medical applications aside, CRISPR-Cas also holds great potential for agriculture. The gene-editing tool could help to generate plants that are resistant or at least more tolerant concerning fungi, insects or extreme weather phenomenon such as heat, drought or massive downpour, which occur more often in recent years due to climate change and can wreck entire harvests. The plants could also be made to produce higher yields or provide certain vitamins (e.g. golden rice), thus providing a huge relief in the fight against world hunger. However, the debate is still ongoing whether CRISPR-induced genetic modifications result in a genetically modified product (GMO) that should be labelled as such. GMO products are viewed critically by many customers and will thus be difficult to market.

The fact remains that the CRISPR-Cas system is a significant milestone in modern science with seemingly endless potential from diagnostic tests to curing nearly any disease there is, including a shortage of transplant organs, to alleviating world hunger. And yet, a system as complex and complicated as CRISPR-Cas needs to be met with due diligence and care in order to minimise risks and side effects. Moreover, the decision of altering the genetic code of (human) embryos requires in-depth ethical and moral deliberations.