Characterising Exoplanets to Understand the...
Back

In late January 2020, the CHEOPS (CHaracterising ExOPlanet Satellite) mission, a satellite mission scientifically chaired 2019 Nobel Laureate in Physics Didier Queloz, had first light. Over the next 3.5 years, the mission run by ESA and a consortium of 11 European countries led by the University of Bern will tackle various scientific questions concerning the interior composition of planets and their atmospheres as well as the formation and evolution of these systems and how this translates to our own solar system.

Dr. Luca Fossati, group leader at the Space Research Institute of the Austrian Academy of Sciences is one of its scientific members and took the time to explain to us the CHEOPS mission and its scientific goals. Dr. Fossati pointed out that CHEOPS belongs to a new generation of ESA missions, so called S-Class Mission. It is the first of its kind to be brought into space by ESA: “Lots of the knowledge that was necessary to build CHEOPS had already been gathered by building CoRoT. Also the consortium who has built CHEOPS is not too different from that of CoRot. That was necessary because CHEOPS was the first ESA S-Mission. As an S-Mission the three constraints are that the mission is cheap, that it can be built fast and that it does not need any technological development.”

While CoRoT was the predecessor of CHEOPS, the observing strategy and the sensitivity changed. Both missions use photometry (transit method) for planet detection, and in the case of CHEOPS, characterisation. This means that a star’s luminosity is carefully monitored, because changes in its luminosity hold information on possible exoplanets and their characteristics as described in the image below. 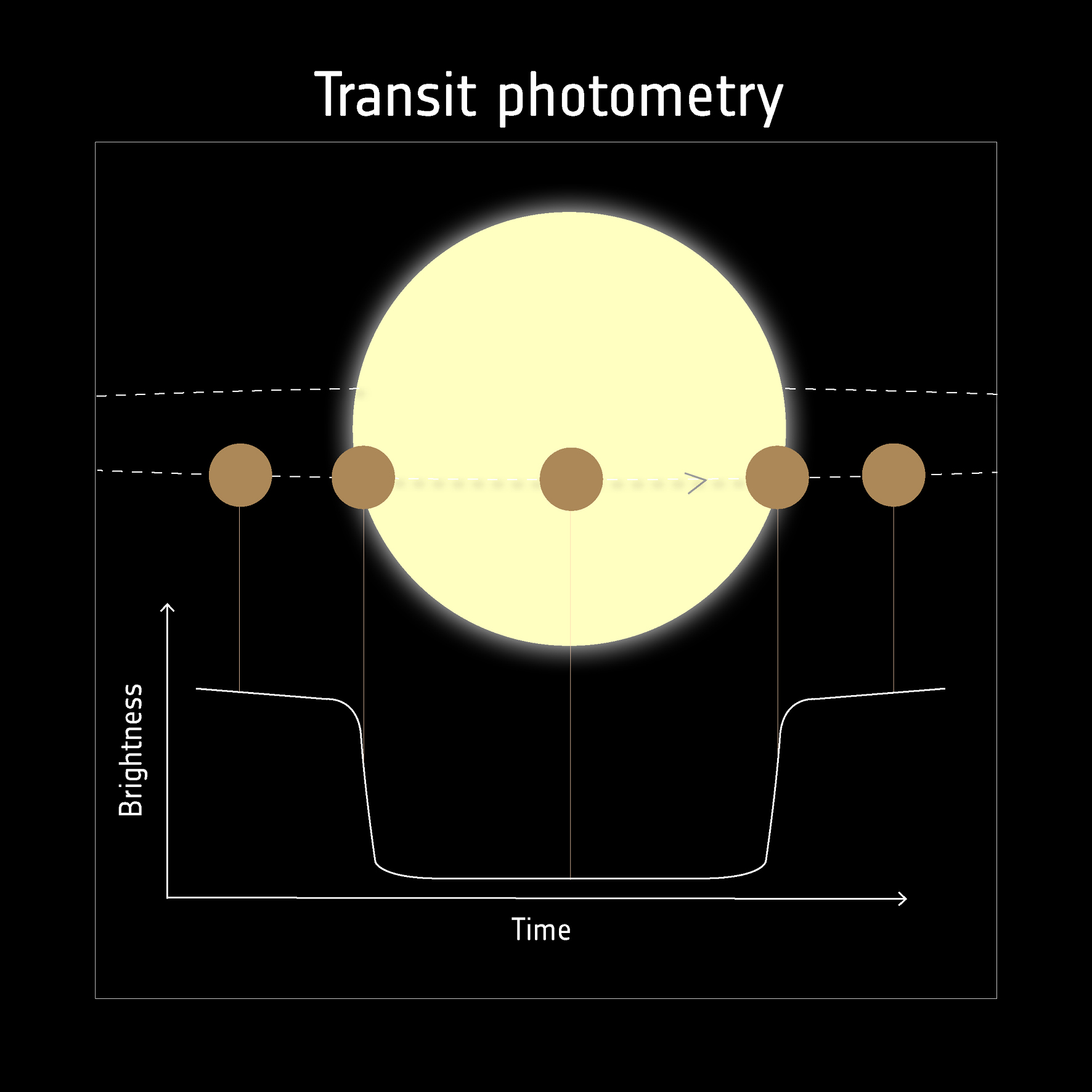 Transiting exoplanets are detected as they pass in front of – transit – their host star, causing a dip in the starlight as seen from the observer’s viewpoint. The transit repeats, with the time interval depending on the time it takes the exoplanet to orbit its star. For example, an observer of our own Solar System would have to wait a year to see a repeat of Earth transiting the Sun. Credit: ESA

Dr. Fossati pointed out that the limiting factor for the CHEOPS science cases is not the detector but the star. While CoRoT targeted many stars at a time with a large field of view of, CHEOPS takes one star at the time with high precision: “Consider that in many cases the noise level coming from the instrument and the photon noise will in the end be smaller than what the flickering of the star will be. “

The flickering is nothing else than convective cells as we know them from our own sun. The order of magnitude of the effect of convective cells, solar flares or sunspots on a star are actually in the same order as the dimming of the planet transiting its host star is. Hence, the scientists are working hard, together with their colleagues using spectroscopy, to find a way to eliminate these disruptive factors from their data.

The stars observed are already known to host exoplanets by the means of the radial velocity method. 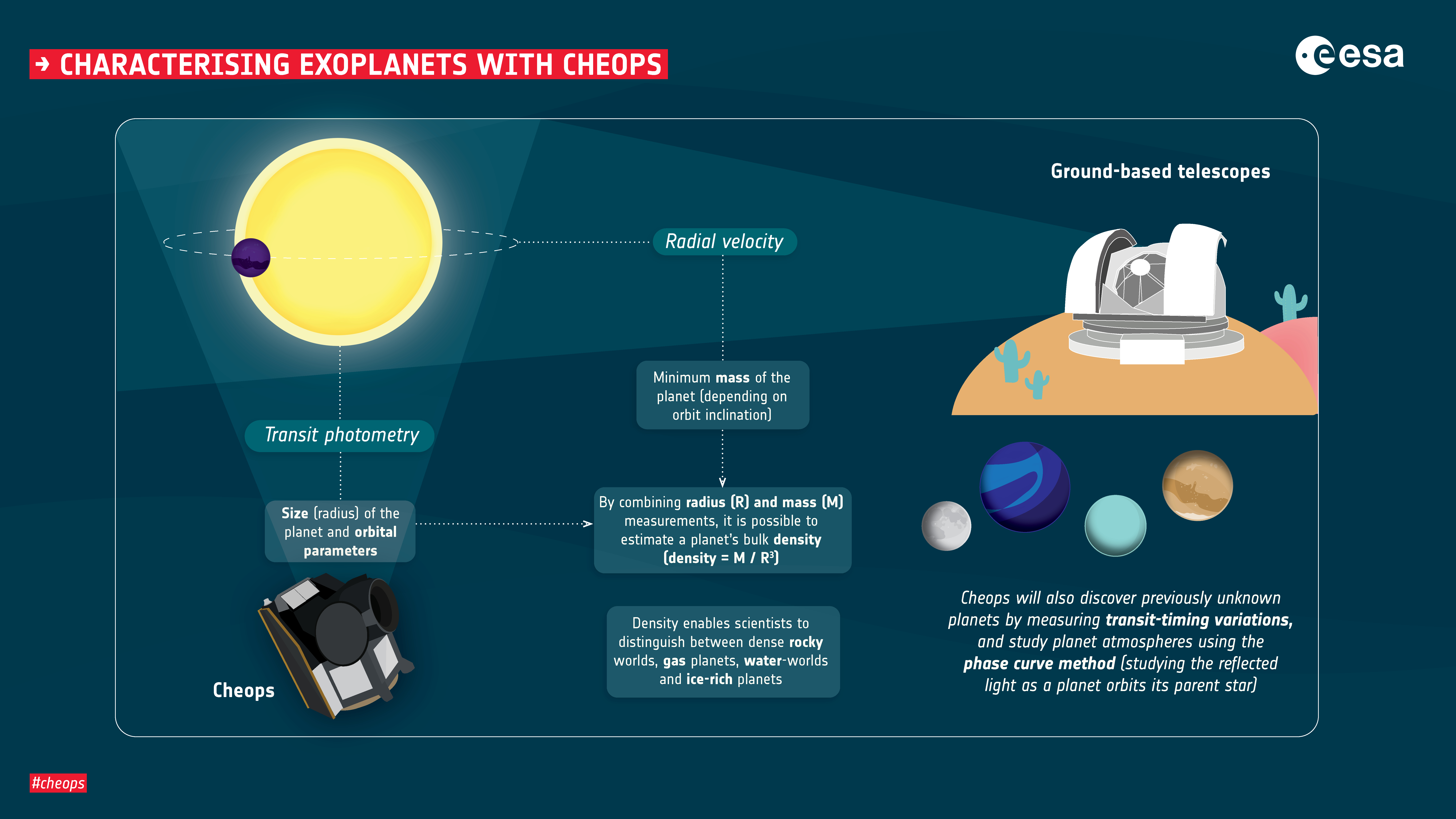 The mission will target stars hosting planets in the Earth- to Neptune-size range, yielding precise measurements of the planet sizes. This, together with independent information about the planet masses, will allow scientists to determine their density, enabling a first-step characterization of these extrasolar worlds. A planet’s density provides vital clues about its composition and structure, indicating for example if it is predominantly rocky or gassy, or perhaps harbours significant oceans. Credit: ESA

Combining the knowledge retrieved by spectroscopy (stellar mass, planet mass, and distances) photometry is the key to the final property needed to characterise the planets’ interior and atmosphere in a first attempt: the radius of the exoplanet. The form and the depth of the light curve changes with the size of the planet transiting the star, and gives insights to the orbit of the planet around its star. This is also the core science project for Dr. Fossati, who is especially interested to learn more about the composition of the observed exoplanets: “If you have very precise photometry you get very precise radii [of the planet] and for very precise radii and decent masses [of the planet obtained via radial velocity method] you get decent densities. And already from densities you can guess what type of planet it is going to be.”

With this data a science project that has not been feasible before can be undertaken. Dr. Fossati explains why the knowledge about planet densities for planets between 2 – 6 Earth radii (RE) is so important for our understanding of planet formation and evolution: “Which is the big problem we currently have with low mass planets? Low mass planets with 2 – 6 RE show a great diversity. There are some planets which seem to be rocky and some planets which seem to be just thin air. But the uncertainties that we have on the mass and the radius [until now] are not good enough to identify whether they are just rocks, harbour oceans or how much air/gas there is in the atmosphere. So, CHEOPS is the machine that will put down the uncertainties to the level we need to distinguish really rocky planets and gaseous planets.”

To distinguish the interior of the small planets (2-6 RE) is already a remarkable feat, but furthermore astronomers will be able to deduce clues about planet formation from these densities as Dr. Fossati explains: “Planets below 2 RE have the exact same density as the Earth. For planets with radii between 2 – 6 RE the density can be anything. This leads to the questions: Is this sort of boundary which we see at 2 RE really a hard boundary, as it appears to be from the observations gathered so far? If it is a hard boundary, what is happening during planetary formation or evolution that leads to it? Why do planets bigger than 3 RE have light gases, like hydrogen, in their atmospheres, while planets smaller than 2 RE do not? This is also what we see in the solar system: Earth, Mars and Venus do not have hydrogen-dominated envelopes.” 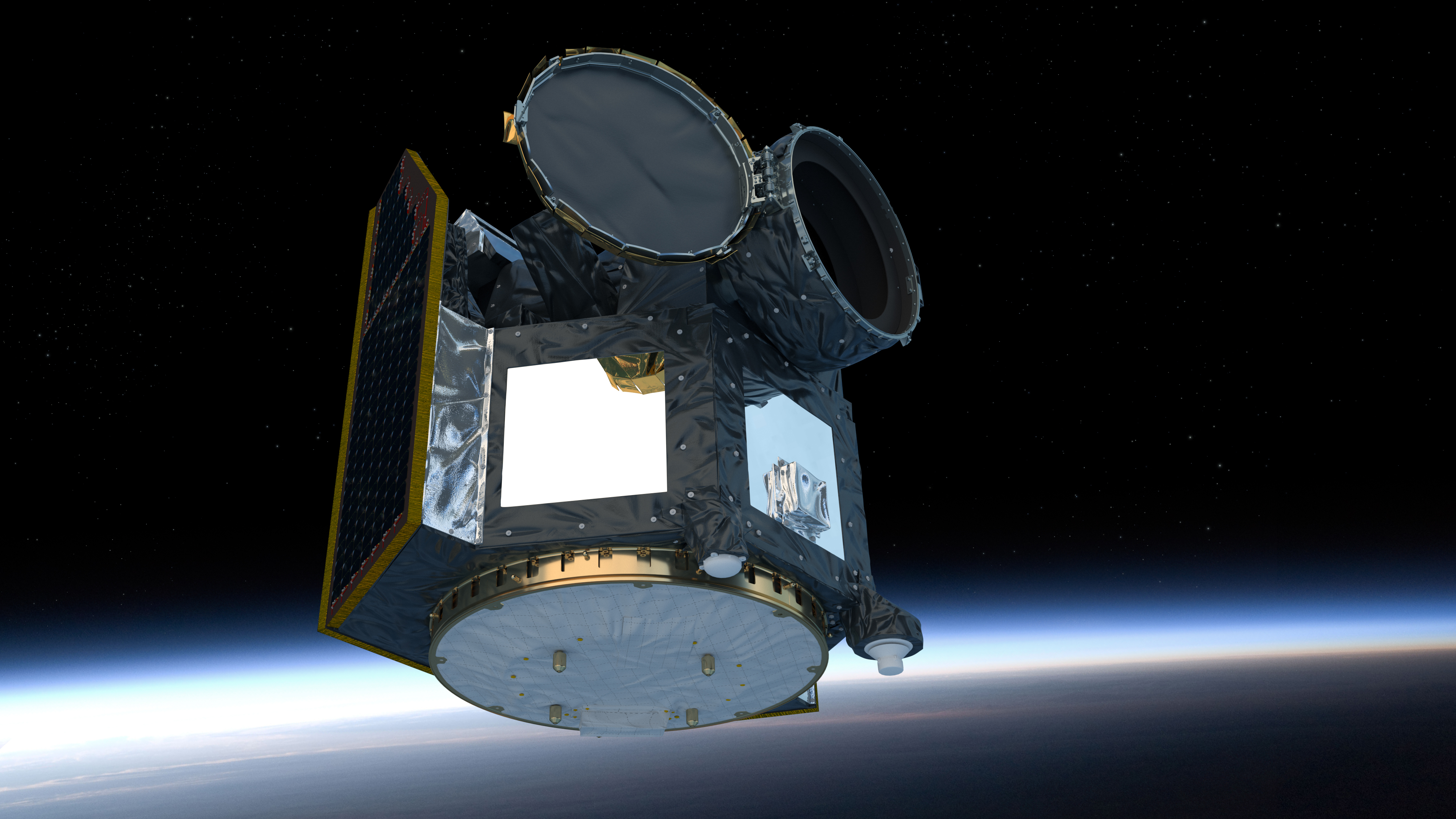 With CHEOPS, astronomers will be able to gather samples of tens of planets where the density can be determined and further parameters such as stellar mass, orbital separation are known. This allows investigating the correlation of the various parameters with each other on basis of reasonable statistics. “These are results that would be gold for planet formation,” adds Dr. Fossati.

While the density measurements are one core project, further characteristics of the exoplanets are explored. Hot Jupiters allow for the measurement of their albedo and hence the detection of winds and clouds in their atmospheres. The mission duration of at least 3.5 years, if extended 5 years, will also allow to observe orbital decay (planet migration from outer orbits closer to the host star) for selected targets as well as more exotic projects such as the detection of exo-moons and –rings.

All of these observations will help to determine further research projects, strategies and targets with upcoming missions such as NASA’s James Webb Space Telescope (JWST) and ESA’s PLAnetary Transits and Oscillations of stars (PLATO) as well as earth-bound observations such as the Very Large Telescope (VLT) and the third generation of spectrographs.

While this still seems a far stretch from the main question the CHEOPS team wants to answer – “What are the conditions for planet formation and the emergence of life?” – Dr. Fossati could easily put the expected results in a framework on how this mission will revolutionise our understanding of how planetary atmospheres may evolve into habitable environments: “It is a very ambitious question. By constraining the densities of planets with known ages, CHEOPS can really help us understand how primary hydrogen atmospheres evolve with time and get lost to space enabling the emergence of secondary atmospheres, closer to Earth’s. The Earth went through this same process. So, which are the timescales for hydrogen envelopes to escape a planet and then give rise at the right time to conditions that may be good to harbour life? The CHEOPS results can be translated into information that can be used for constraining one of the many key factors playing a role in the emergence of life.”

Stefanie Unterguggenberger received her PhD from the Institute for Astro- and Particlephysics in Innsbruck in 2017. From her time as an undergraduate up to her PhD she was always interested in public outreach and science communication. From 2019-2020 she was responsible for the Mediatheque of the Lindau Nobel Laureate Meetings.