Agora Talk with Martinus Veltman:...
Back

Nobel Laureate Martinus Veltman may be losing his hearing by his own admission, but his humour is still in rude health. At the start of his Agora Talk titled ‘The Future of Particle Physics’ on the fourth day of the 69th Lindau Nobel Laureate Meeting, he had a confession: “The title of my talk… has no relation whatsoever to the content of the talk.”

Instead of looking to the future, he took the attendant crowd on a whirlwind journey into the past, recounting the background to his 1999 Nobel Prize in Physics, shared with his student Gerardus ‘t Hooft, for devising a mathematical system that predicts the properties of the subatomic particles that make up the universe.

Key to his breakthrough was dealing with infinities in quantum field theory, the theory describing the physics of elementary particles: “Most of the difficulties in the theory occur when you try to make a real calculation and what you get as a result is infinite,” he said. “That’s when you know something is wrong.” 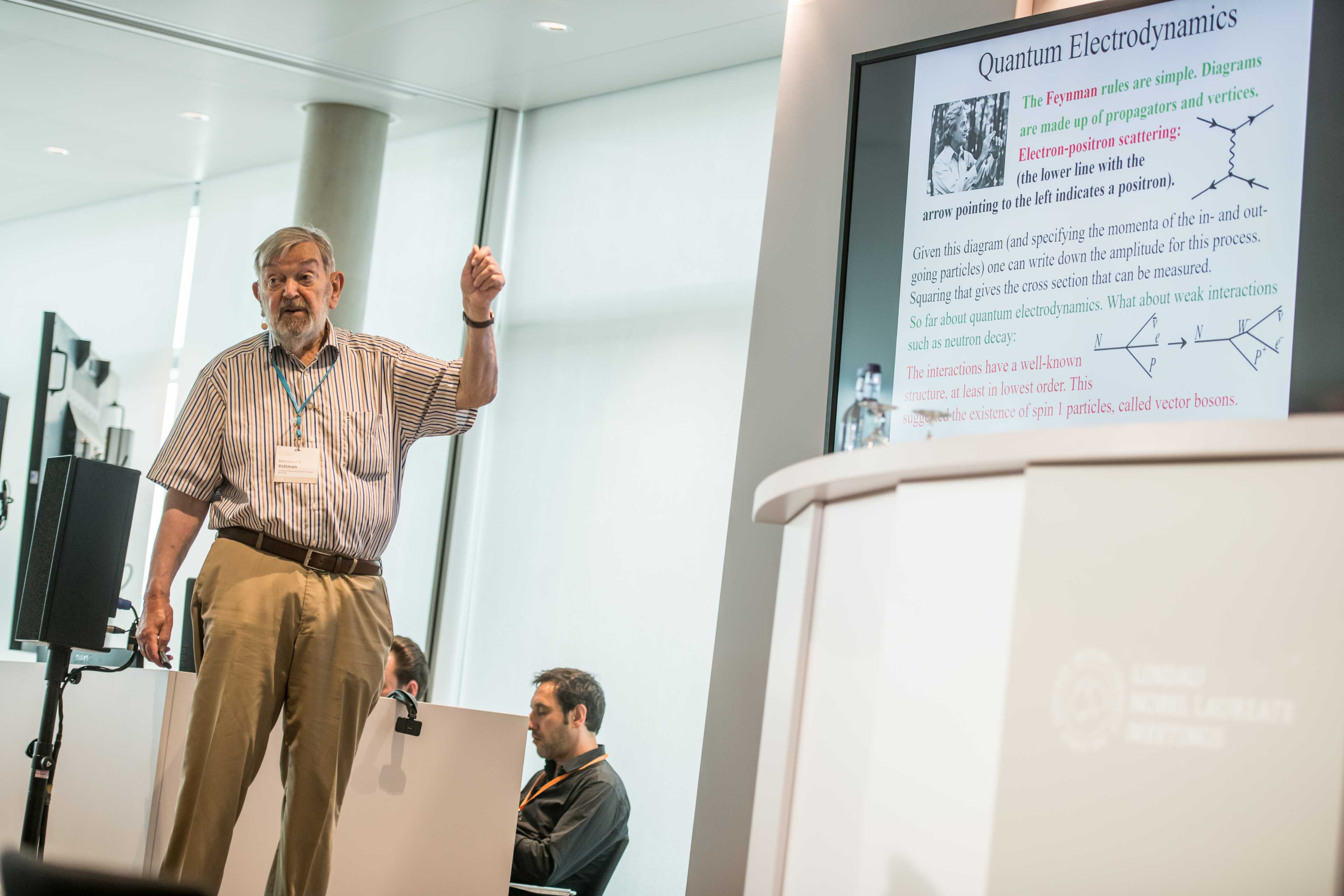 To illustrate this, Veltman’s tour of the past started in 1904, describing the difficulties Max Abraham and Hendrik Lorentz encountered when they presented their theory of the electron’s self-energy. Abraham and Lorentz assumed the electron was a small sphere whose charge was smeared over its surface. The self-energy was the energy of this sphere and was inversely proportional to the sphere’s radius. Clearly, this meant that as the radius goes to zero, the self-energy goes to infinity.

No further progress was made on this problem for 35 years. It required the advent of quantum field theory and the ingenuity of Victor Weisskopf to make any inroads at all. Weisskopf did not remove the infinity, but instead showed that its degree of divergence was logarithmic. In effect, he created a regulator mechanism to make the infinity finite. “The regulator mechanism is one of the difficulties of quantum field theory,” said Veltman. “It might violate important properties that you have seen to be true.”

Wolfgang Pauli and Felix Villars finally solved the electron-self-energy problem – and other problems in quantum mechanics that had left physicists scratching their heads – in 1949. Pauli–Villars regularisation, as their solution is called, is based on two important contributions to quantum field theory made the year before.

The first of these was renormalisation, a huge breakthrough introduced by Hans Kramers. In a renormalisable theory, all the infinities can be hidden in the available free parameters so that experimentally observable quantities can be computed.

The second was a practical development made by Richard Feynman. Feynman introduced a technique whereby physicists could make pictorial representations, known as Feynman diagrams, of the mathematical expressions describing the behaviour of subatomic particles. Then, using Feynman rules for their given theory, they could compute every experimental prediction of that theory. This simplification was key to making progress in the complicated world of quantum field theory.

These advances cleared the fog, allowing meaningful experiments to be conducted. However, they were not a panacea. “There can be two types of field theory: a field theory where every infinity can be absorbed in a free parameter and theories where you cannot do that,” said Veltman. 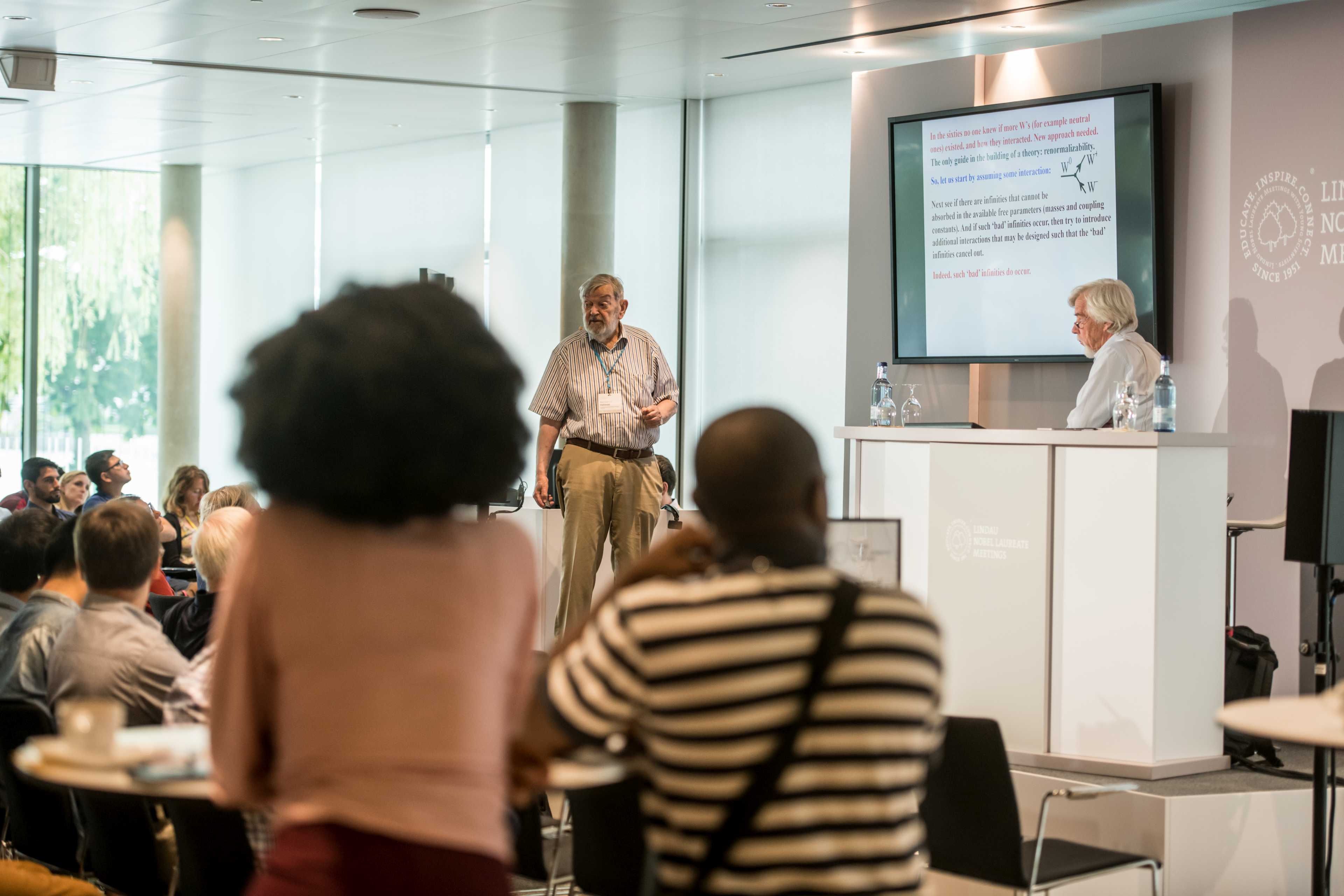 Weak interactions fall into the latter group. These are phenomena observed experimentally and characterised by their relative weakness, such as neutron decay, muon decay and neutrino events. In the 1960s, weak interactions had a well-known structure, which strongly suggested the existence of unobserved particles named vector bosons. But by the time Veltman got involved in the field, no one knew if they existed and how they interacted.

To build a theory for weak interactions, physicists applied their tried and tested renormalisation strategy. But when they did so, stubborn infinities remained. To get around this, Veltman and ‘t Hooft began the search for a workable solution in 1969. They did so by introducing new interactions involving vector bosons with carefully selected strengths that cancelled the infinities. The resulting theory removed almost all of the infinities, introducing a number of new very well-defined interactions, and allowing scientists to calculate the physical properties of several subatomic particles including the top quark, which was first observed in 1995.

However, one stubborn infinity remained. To get rid of it required a new particle and this new particle turned out to be the Higgs boson. Although introduced by Nobel Laureate Peter Higgs in a completely different context – and experimentally discovered at CERN in 2010 – it is welcome confirmation to know that the Higgs boson also comes about as a consequence of Veltman and ‘t Hooft’s theory – it makes the theory of weak interactions renormalisable. “That particle solved all the problems,” Veltman recalls. “I can tell you it was a great day… when we knew this was the truth, that this was the way the world was made and not just a fantasy in our heads.”