A New Generation of Supercolliders
Back

In the early 1960s, the leading theory of fundamental particles and their interactions — what we now call the standard model — appeared on the brink of collapse. After the development of quantum electrodynamics, physicists wanted to understand the weak nuclear force. Several proposals based on quantum field theory cropped up, but all had one major flaw. They would only work if the particles did not have mass, which was the furthest thing from reality for the three massive particles that mediated the weak interaction.

Groundbreaking work from three independent groups in 1964 found a solution, saving the standard model from obsolescence and moving our understanding of the universe forward. The mechanism described by these physicists involves particles acquiring mass via interaction with an invisible scalar field, later dubbed the Higgs field.

Close to a half-century later, a team running the Large Hadron Collider (LHC) at the CERN laboratory in Switzerland discovered the particle associated with the Higgs field, the elusive Higgs boson. A year later, François Englert and Peter Higgs — two of the physicists who came up with the mechanism — won the 2013 Nobel Prize in Physics for their now-confirmed theory on how particles acquire mass.

The finding of the Higgs boson, the last undiscovered piece of the standard model, received worldwide attention and acclaim. It remains the crown jewel of numerous accomplishments made with the LHC over a decade of operation. The accelerator itself is a marvel, maintaining its place as the world’s largest and most powerful particle collider.

But a new generation of supercolliders is coming to dethrone the LHC. Groups in China and the European Union have announced plans for particle colliders that will eclipse the size, power, and speed of the previous world record holder. In 2018, a team at Beijing’s Institute of High Energy Physics (IHEP) released a conceptual design report for the China Electron Positron Collider (CEPC), with an underground tunnel stretching 100 km. Earlier this year, physicists at CERN unveiled a blueprint for their own 100 km-circumference Future Circular Collider (FCC). Both will dwarf the 27 km-circumference LHC.

Some question whether these multi-billion dollar mega-projects are worth their exorbitant cost. The first portion of the FCC project, an electron-positron collider, will run about $9 billion. The CEPC is estimated to cost around $6 billion. But the real question is, what will the next generation of supercolliders bring to the table in terms of scientific results? In other words, what will a post-LHC world really look like?

For one, the discovery of the Higgs boson opens up a new area of research on the particle itself. The biggest guaranteed physics goal of the FCC, according to its conceptual design report, is to better understand the Higgs boson. The team wants to tackle the fundamental origins of the Higgs field, as well as the origin of the mass and self-interaction parameters of its corresponding particle. The FCC may provide a window into new hidden sectors beyond the standard model, since the theory does not account for dark matter, which makes up more than 80 percent of total matter. In addition, the supercollider could explore the reasons for the puzzling matter-antimatter asymmetry that allows us to exist.

Initiated in 2013, the FCC project begins with the construction of a 100 km underground tunnel that houses a high-luminosity, high-precision electron-position collider (FCC-ee). The machine will smash together electrons and their antimatter counterparts at energies up to 360 GeV, enabling detailed study of the Z, W, Higgs, and top particles. For instance, it would allow for precise measurement of the Z and W boson masses, as well as more accurate of the Higgs boson. 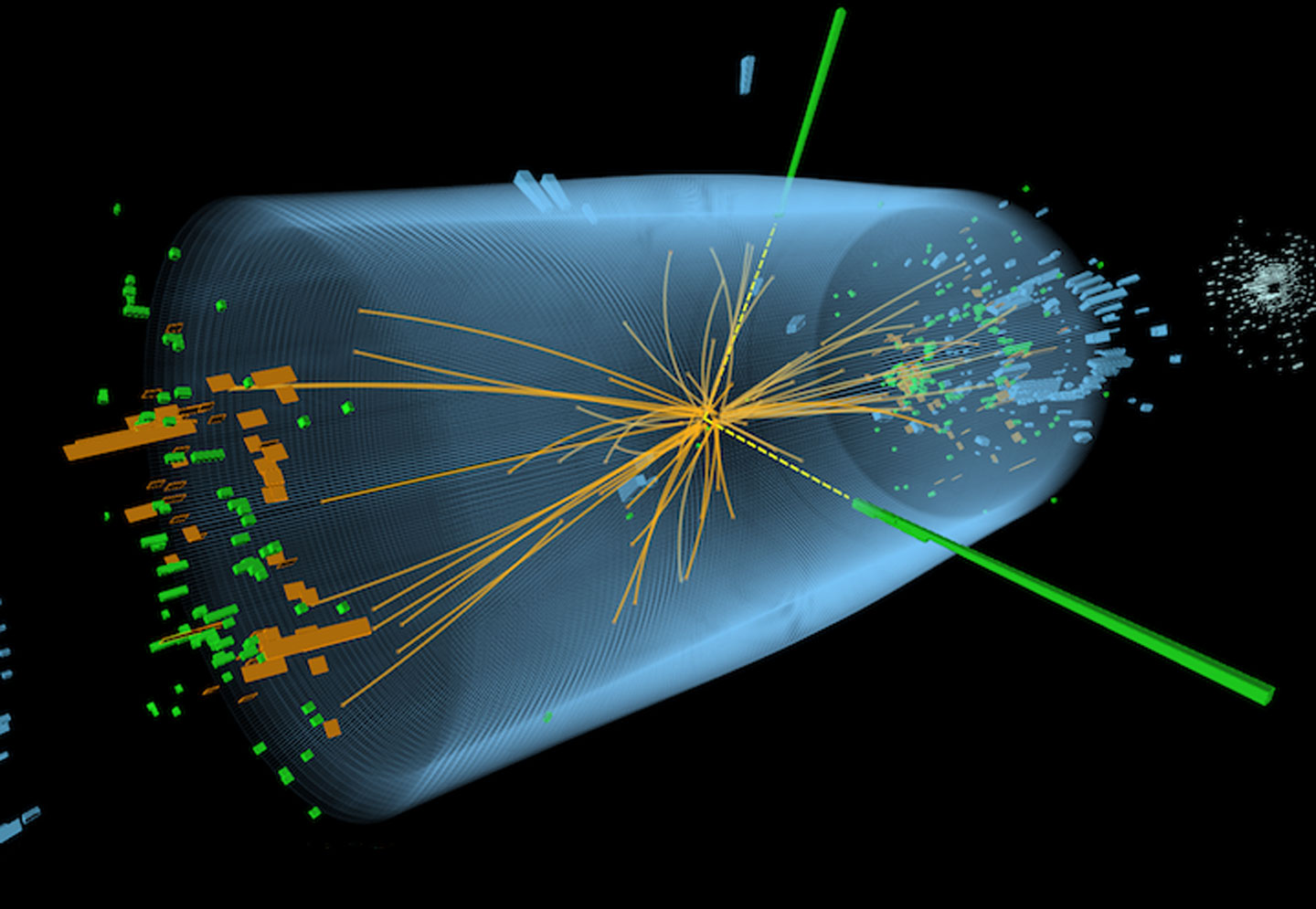 Candidate Higgs boson event from collisions between protons in the CMS detector on the LHC. From the collision at the centre, the particle decays into two photons (dashed yellow lines and green towers). © CMS/CERN

The first phase, which would start around 2040, involves running the collider at 91 GeV for four years to produce 10^13 Z bosons. Next, FCC-ee will operate at 160 GeV to produce 10^8 W+ and W- particles for a two-year period. For the three years afterwards, it will produce a million Higgs bosons by running at 240 GeV. The last phase involves cranking the machine up to its top energy of 360 GeV to produce a million top and anti-top pairs over five years.

After the FCC-ee part of the project wraps up, the proposal suggests that the same 100 km tunnel can be converted to house a 100 TeV proton-proton collider (FCC-hh). At energies seven times greater than the LHC, the FCC-hh could produce entirely new particles at higher masses up to several tens of TeV. The conceptual design report states that the new collider “will have a direct discovery potential over five times greater than the LHC” when looking for particles such as Z’ or W’ gauge bosons corresponding to new fundamental forces, or gluinos and squarks in supersymmetric theories. FCC-hh would start operation in the late 2050s and cost approximately $17 billion.

While the FCC’s proposal sounds promising, another supercollider may reach the finish line faster. China hopes to get the CEPC up and running by 2030, a decade earlier than the FCC. The machine has already been dubbed “a Higgs factory” that will produce over a million Higgs bosons in seven years. It consists of a 100 km underground tunnel with a double-ring collider. Electron and positron beams will circulate in opposite directions in separate beam pipes, smashing together at two intersection points.

The CEPC will run at a center-of-mass energy of 240 GeV to produce the Higgs particles, but it can also operate at 91 GeV to produce one trillion Z bosons and 160 GeV to produce 15 million pairs of W bosons. Similar to the FCC, the tunnel for the CEPC can also house a proton-proton collider in the future. The IHEP plans to set aside 7 years for Higgs physics, followed by two years in Z mode and one year in W mode. Around 2040, the installation of the Super Proton-Proton Collider (SPPC) will begin in the same tunnel.

In terms of scientific findings, the IHEP first and foremost aims to further demystify the Higgs boson. The production of one million Higgs bosons will allow for precision measurement of the Higgs couplings, the interactions between the Higgs field and other particles which give them mass. The focus of the 2-year Z run will be on more accurate measurements of the electroweak interaction, which is the unified description of electromagnetism and the weak force. It also provides an opportunity to search for new physics involving the origin of neutrino mass and the dark sector. Lastly, the goal of the W run is to measure the W mass to a precision of 1 MeV.

Despite the ambitious nature of both projects, no one can predict whether the CEPC and FCC will follow through on their promises of new discoveries. Some critical voices have arisen – for example, an opinion piece by former particle physicist Sabine Hossenfelder suggests that a large project like the FCC could be set aside for smaller, less expensive experiments that would tell us whether a larger collider would be even worth building.

One thing is for certain, however. The mere process of building these behemoth instruments, running countless experiments, and participating in a common research goal will push scientific research, engineering, and technology to a never-before-seen limit. In a world where nationalist movements are growing, an international collaboration like CERN could be threatened in the future in favor of national projects like China’s CEPC. But in the end, the hope is that these efforts results in a payoff which has a positive impact on all of humankind.